As Wizz launched their latest new route from the airport, the inaugural flight to Poznan coincided with the news that Glasgow Prestwick was named the airline’s Best Overall Airport for the month of December.

This follows on from a second place finish in November and is based on performance criteria such as aircraft turnaround time and baggage processing. 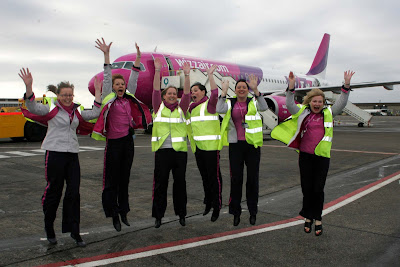 Poznan is the fifth largest city in Poland and the fourth destination in that country to be served by Wizz flights from Glasgow Prestwick, along with Warsaw, Gdansk and Katowice.

Wizz operates at more than 40 airports around Europe and recently handled its 10 millionth passenger. 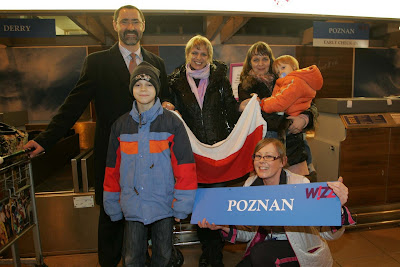 [Picture shows the Malgorzatekiert family, who were returning home from a holiday in Scotland on the inaugural flight, at check-in with Glasgow Prestwick’s Nichola McLean. Mr Malgorzatekiert works in Glasgow and this route will help him return to visit his family more often as he lives a short distance from Poznan Airport.]

The Best Overall Airport accolade clearly shows not only the ability, but also the dedication and teamwork of the Prestwick Handling department, which is made up of Passenger Handling, Aircraft Dispatch, Ground Services, Motor Transport and Passenger Services.

Two Glasgow Prestwick staff members, Scott Plain and Barbara McMaster, received free flights from Wizz as a reward for the effort put in across all the departments.

Glasgow Prestwick Airport chief executive Mark Rodwell said: “Wizz have shown they are serious about growing their customer base and route network at Glasgow Prestwick in the two years they have been here.

“The new route to Poznan is yet another indication of this commitment. Poland is a very strong market for us at the present time and we are keen to capitalise by offering new services.”

He added: “To finish second and then first in the Wizz league table in consecutive months is a fantastic achievement and demonstrates even further the strong working relationship between the two companies.” 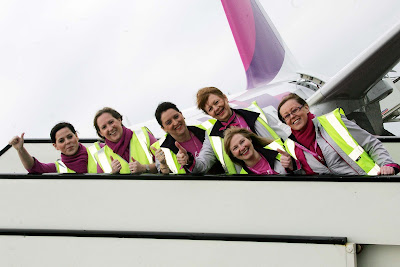 Jules Matteoni, manager of Prestwick Handling, was delighted that his team helped the airport to seal top spot in December’s league table.

He said: “This shows our commitment to ensuring that airlines and their passengers have a brilliant experience here, with a focus on ensuring that delays are minimised and that passengers’ journeys are totally stress-free.

“Successful low cost airlines like Wizz have very high standards when it comes to on-time performance and I’m proud of my team for demonstrating how well we look after our airline customers here.”

In addition to handling aircraft for Wizz, Glasgow Prestwick has recently adopted a trial whereby Wizz passengers will be able to check-in four hours before departure, which it is hoped will lead to less queuing and congestion in the terminal during peak periods.

Passengers travelling on the new route to Poznan are entitled to free rail travel to and from anywhere in Scotland for the first six months of its operation, and half price rail travel thereafter.

Passengers simply present their official flight confirmation at the airport information desk or any staffed railway station to take advantage of the offer.

Wizz Air anticipates that it will carry approximately 300, 000 passengers on its Poznan routes in 2008.

Wizz Air currently operates a young fleet of Airbus A320 aircraft on more than 90 routes. The airline offers flights to and from Poland, Hungary, Bulgaria, Croatia, Slovenia and Romania. Wizz Air carried over 3 million passengers in 2006.

The airport currently handles approximately 2.5 million passengers per year and offers more than 30 scheduled services to European destinations, as well as charter flights to popular holiday spots. Glasgow Prestwick has excellent road and rail links to the rest of Scotland.