Status Quo will rock the Burns Festival at Ayr Racecourse

ROCK icons Status Quo are to headline the 2008 Burns Rock At The Racecourse concert at Ayr Racecourse, one of the main events of the Burns an’ a’ that Festival. 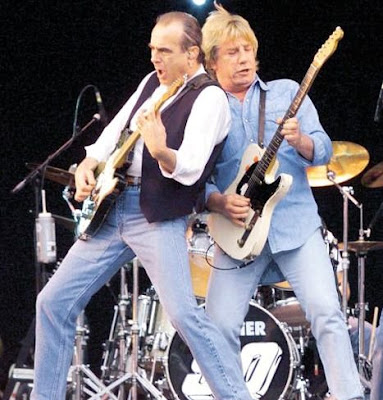 As the legendary band announced the prestigious gig, founder member and guitarist Francis Rossi said: “The boys are delighted we have been asked to headline Burns Rock At The Racecourse. Normally the furthest south we are in Scotland is Glasgow, so its good to be playing Ayr.

“I’m not too familiar with the works of Burns, but I’ve plenty of time to read up before the concert, and who knows I might even recite something form his works.”

Burns Festival director Michael McDaid said: “This is great news for the Burns an’ a’ that Festival. Rock At The Racecourse was a huge success last year, and to be able to announce that a band of Status Quo’s standing will be playing next year is brilliant.

“The racecourse is a perfect venue for concerts of this type, and everyone who attended earlier this year recognised that.

“Status Quo have a huge following, and by bringing a band of this magnitude to Ayr we are sure will be build on last year’s audience of 5,000 people. The Burns an’ a’ that Festival is all about attracting visitors to this wonderful part of Scotland, and I am sure we will achieve that with this concert.”

Status Quo is one of the most successful bands in the history of rock. They formed in 1966, and have sold tens of millions of albums and singles all over the world. The band is currently on tour promoting their latest album “In Search Of The Fourth Chord”.

Tickets for the concert priced £27.50 are now on sale from Ayr Racecourse and Ticketmaster.

Email ThisBlogThis!Share to TwitterShare to FacebookShare to Pinterest
Labels: Ayr Racecourse, Ayrshire, Burns an' a' that Festival, Scotland, Status Quo