SCOTLAND'S First Minister Alex Salmond today (Tuesday March 11) visited Glasgow Prestwick Airport in Ayrshire, where he was presented with a new study which reveals that the airport accounts for nearly 3,000 jobs in Scotland. 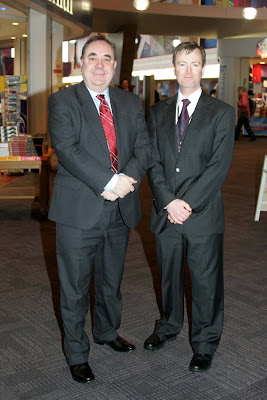 The study also shows that total expenditure associated with the airport is well in excess of £200 million per annum, with £173 million generated by inbound visitors to Scotland who use it.

The First Minister expressed an interest in visiting Glasgow Prestwick Airport after it responded effectively to the attempted terrorist attack on Glasgow Abbotsinch Airport in June 2007. Security was quickly tightened and numerous additional passenger flights were handled when Glasgow Abbotsinch closed.

The First Minister Alex Salmond said: “My visit to Prestwick today is a reflection of my Government’s gratitude to the airport for its excellent support and help during last year’s terror attacks on Glasgow Airport.

“It was a testing time for Scotland, most notably for our airports and emergency services. Glasgow Prestwick played a key role in enabling Scotland to remain open for business with minimum disruption to travellers.

“The importance and value of Glasgow Prestwick Airport as a gateway to Scotland was again highlighted during this period. I would like to thank all staff for extending their welcome and first class service to the many redirected passengers and visitors from around the world throughout the terror attacks.

“I have been presented today with an economic report prepared by the airport which I will read with great interest. We are clear that our number one priority as a Government is to increase sustainable economic growth.

“Airports are a key driver in this – in terms of securing and growing business and tourism links as well as job creation in the aviation and customer service industries.” 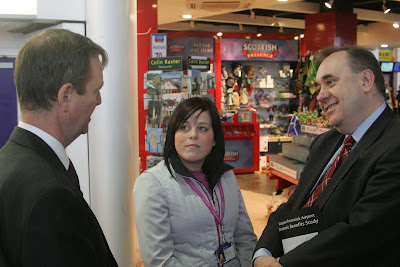 The First Minister met with airport management before attending the launch of the economic benefits study, which was carried out by Edinburgh-based SQW Consulting. 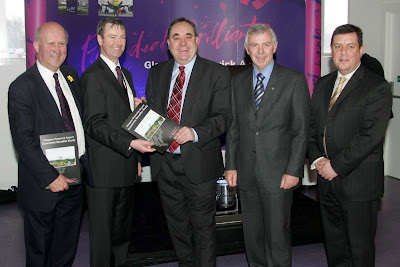 Glasgow Prestwick Airport chief executive Mark Rodwell commented: “We are delighted to welcome Mr Salmond to the airport for the first time as First Minister, as we release the results of this economic study.

“Along with our partners South Ayrshire Council and Scottish Enterprise, we felt the timing was right to commission the study as a prelude to the launch of our draft Master Plan, that will see us enter into a period of public consultation about the airport’s future.

“The findings of the study show how important the airport has become, particularly to Ayrshire but also to Scotland as a whole, in terms of generating employment, tourism, expenditure and investment, as well as providing valuable connectivity around Europe.”

Glasgow Prestwick employs 480 staff, while activity at the airport is responsible for 1,733 jobs in Ayrshire and 2,941 jobs in Scotland (this total includes Ayrshire).

In 2007 Glasgow Prestwick handled 2.4 million passengers but if the airport was not here, the study estimates that approximately 240,000 incoming passengers would have been lost to Scotland and approximately 780,000 lost to Ayrshire.

Under this scenario, some of the activity and therefore economic value would be transferred elsewhere in Scotland and Europe and therefore not lost to the wider economy, although most of it would be lost to Ayrshire.

Economic value is often measured by Gross Value Added (GVA) rather than the total expenditure generated by a business. GVA is the value of wages and profits generated; it does not take into account the value of goods and services brought in and consumed in production, making it lower than expenditure.

“Tourism is an economic growth sector in Scotland, and I welcome the opportunity the airport provides in linking South Ayrshire to business and visitor centres in the United Kingdom, Europe and beyond.

“The airport will be a great asset in welcoming visitors to South Ayrshire in 2009 to enjoy the Homecoming celebrations, to discover Burns country, play golf and enjoy the many facilities and outstanding scenery that we have to offer."

“The importance of the airport as a tourist gateway and a hub for the aerospace industry is clear. New routes through GPA and its continuing expansion have had a significant and positive impact on overseas visitor numbers to Ayrshire and Scotland and it has also played a key role in developing our cluster of successful aerospace businesses.”

As part of the study a survey of 1,000 Ayrshire businesses was taken. This survey showed:

* More than half of all respondents feel the airport is important to their business performance and nearly a fifth think it very important or critical.

* Among businesses that have moved to the area from elsewhere, the airport’s presence is important to 18%.

* Without the airport 20% of respondents would make fewer trips, meaning trips still made would be at greater cost in terms of time and money.

* 8% would face major problems without the freight service.