The drinks brand, synonymous with the sport through their long standing sponsorship of the Grand National at Aintree, will be the main sponsors for the three-day Festival in September, replacing the Tote who had sponsored the race since 2001.

Announcing the sponsorship deal, Scottish & Newcastle regional sales director Alasdair Moore said: “We are delighted John Smith’s will be the new sponsors of the Ayr Gold Cup. The race is famous throughout Europe, and this is a tremendous opportunity for us.” 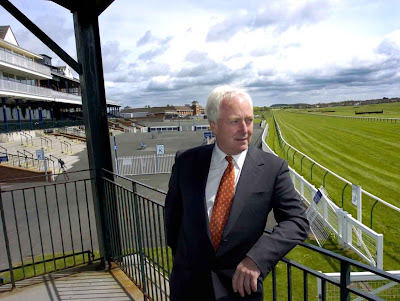 Ayr Racecourse chairman Alan Macdonald (pictured above) said: “I am thrilled to welcome John Smith’s - one of the most famous names in racing - to be the new sponsor of the Ayr Gold Cup Festival. The biggest race of the Festival is the Ayr Gold Cup itself, and the John Smith’s sponsorship is set to increase the prize money on offer for the big races on the Friday and Saturday.

“The John Smith’s Ayr Silver Cup run on Friday, which is Ladies Day, will be run for a total prize fund of £50,000 - a tremendous sum considering this is a consolation race. The main race of the Festival, the John Smith’s Ayr Gold Cup, will now have a fantastic £150,000 prize fund, which will ensure that this will be a target for all the top trainers.

“Since we took over Ayr Racecourse, John Smith’s have been a great supporter, and have played a significant role in the course’s resurgence. My thanks go to Scottish & Newcastle for this further commitment.”

The Ayr Gold Cup was first run in 1804 and won by Chancellor, also the winner the following year. The first Ayr Gold Cup to be staged on the current Ayr track was in 1907, and was won by Mr. R. Waldie Griffith’s Charis, a five year-old trained by R. Sherwood.

Last year’s race was won by Advanced, trained by Kevin Ryan and ridden by Jamie Spencer and over the three days crowds of 22,630 flocked to the course, the highest attendance for more than 30 years.