AYRSHIRE’S Glasgow Prestwick Airport has won a top industry award for its cargo capability at a glittering ceremony in London.

The airport triumphed at the 25th annual Air Cargo News awards which took place in the Royal Lancaster Hotel.

More than 500 of the industry’s top executives from all over the world were in attendance to see Glasgow Prestwick named Best Cargo Airport (up to 100,000 tonnes per year). 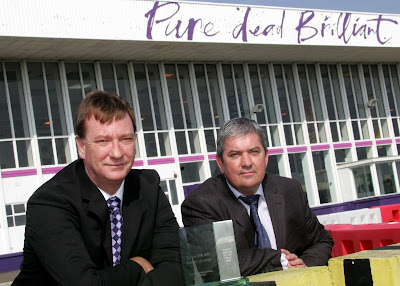 [Pictured: Allan McQuarrie (left) and Nico Le Roux, who make up the airport’s Freight Development Team, with the trophy.]

Nico Le Roux and Allan Macquarie, who are in charge of Freight Development for Infratil Airports Europe, received the award on behalf of the airport.

The award winners have to meet a number of criteria related to volume growth and marketing activity, before the views of industry experts are taken into account when deciding the final results.

Nico Le Roux, Group Manager Freight Development, said: “It is a fantastic achievement for us to win this as it is right up there with the industry’s top awards, and shows just how highly Glasgow Prestwick is regarded by the people who matter.

“The last year has seen an improvement in volume after the market suffered a difficult couple of years.

The recognition comes only days after Glasgow Prestwick announced a strong cargo performance for the year ending March 2008.

A strong emphasis upon freight development has paid off for Glasgow Prestwick, which currently handles around 20 Boeing 747 freighters during an average week.