“Pedal the Ports” on its way to Ayr and Troon

Megan and Mark Palmer, the children of Nick Palmer - formerly ABP Port Director of Grimsby & Immingham and the inspiration for Pedal the Ports as he himself is suffering from MND - rode the bike from Grimsby’s famous Dock Tower on the fundraiser’s inaugural leg. 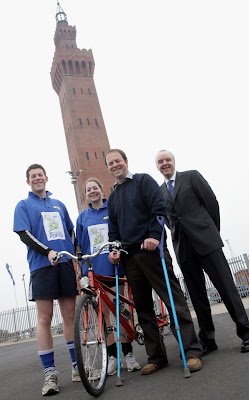 From Grimsby, the tandem headed to ABP’s Ports of Immingham, Hull and then Goole. It was set to continue its journey around ABP’s 21 ports, to Troon, Ayr, Silloth, Barrow, Fleetwood, Garston, Swansea, Port Talbot, Barry, Cardiff, Newport, Plymouth, Teignmouth, Southampton, Ipswich, Lowestoft and King’s Lynn, before arriving back in Grimsby on Saturday 5 July, where a celebratory port-community open day will take place.

The tandem will arrive at the Port of Ayr, via Troon, on Thursday 10 June.

John Fitzgerald, ABP Port Director, Grimsby & Immingham, said: “After six months of planning and fundraising, it was brilliant to see the tandem leave Grimsby this morning on the first leg of its epic journey. We have already had a huge amount of generous support from our employees, customers and friends, but the bike still has a long way to go and there are many challenges yet to face. Having Megan and Mark as the bike’s first riders obviously added another element to what was, in itself, an emotional and very memorable event for the staff at Grimsby & Immingham, who worked with Nick and wish him well.”

He added: “MND has no cure and scientists are not yet sure why it strikes, which is why we need to support research into this dreadful disease.“

ABP has received a great deal of support from its customers in its efforts to raise funds. Graypen/GP Shipping, a provider of tanker-agency and port-agency services with 15 offices at different ABP ports, has donated £21,000 to the fundraiser (£1,000 for each of ABP’s ports). The company’s managing director, Nick Cutsforth, handed the cheque over this morning before the bike left Grimsby.

Throughout June, a blog, featuring the stories and reflections of those taking part in Pedal the Ports, will be posted at www.abports.co.uk/PedalThePorts.htm

ABP's 21 ports, together with the other transport-related businesses that constitute the ABP Group, form a UK-wide network capable of handling every conceivable type of cargo. ABP is backed by investment in modern facilities and equipment, and supported by experienced staff. 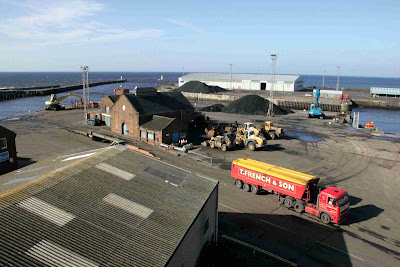 The Port of Ayr (pictured above), renowned for its flexible working practices, has recently become the port of choice for the handling of imported onshore-wind turbines (pictured below). Ayr’s operations team has considerable experience in handling a diverse range of cargoes. 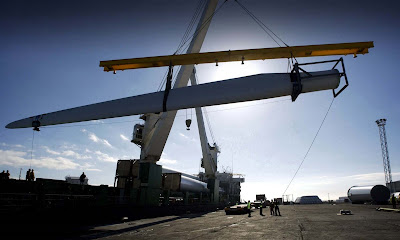 Located on the west coast of Scotland close to Glasgow Prestwick Airport, the port benefits from excellent road and rail connections. Its position at the entrance to the Firth of Clyde makes the port an ideal choice for short-sea shipping to other Scottish ports, and the environmentally friendly timberLINK service provides an efficient alternative to road transportation.

The Port of Troon is well connected by an efficient trunk-road system to the motorways of Scotland and England and is one of the most sheltered harbours on the West Coast of Scotland. A major ferry port, Troon has two ro-ro terminals that serve daily freight and passenger fast-ferry services to Ireland.

The former Ailsa-Troon shipyard is now operated by ABP and provides two dry docks, a pier, large timber-reception and processing facility, and around 8,000 sq m of land for development. In addition, Troon’s proximity to major fishing waters makes it a naturally popular fishing port. Facilities provided at the port include a modern fish market and ice factory.