Provost accepts statue from University of the West of Scotland

SOUTH AYRSHIRE COUNCIL Provost Winifred Sloan has accepted a statue, on behalf of the Council, from the University of the West of Scotland (UWS) at a ceremony within the County Buildings. The statue was commissioned by the University to mark its inauguration last year. 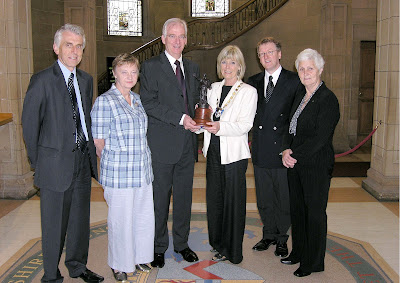 UWS was formed following the merger between the University of Paisley and Bell College, who jointly have over 100 years of educational experience. The University has campuses in Ayr, Dumfries, Hamilton and Paisley and has more than 19,500 students.

Professor Seamus McDaid presented the statue to Provost Sloan, who accepted it on behalf of the Council. Provost Sloan said: “For many years the Council has had very strong connections with the University of Paisley.

“The formation of the University of the West of Scotland is an important development in education terms. The careers and indeed the lives of local, national and international students are shaped during their time at the University. The education they receive and the social interaction they experience provides them with skills that will stand them in good stead in later life.” 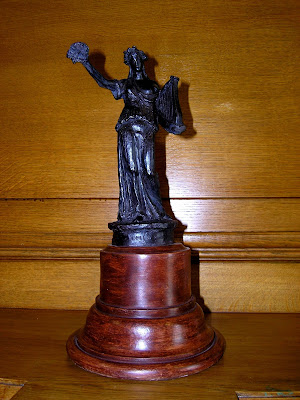 The statue was created by Scots sculptor Alexander Stoddart who is known for his works internationally. The sculptor wanted to create something to reflect the spirit of the four campus University and their ambitions for the future. He decided to produce a small statue of ‘Coila’, Robert Burns’ muse from his poem ‘The Vision.’ In the poem Coila acts as Burns’ inspiration and drives him on according to his true nature and vocation.

“This is a hugely exciting time in the University’s development, and we are committed to making a significant and lasting contribution to the delivery of higher education in Ayrshire.”