John Scott welcomes safer A77 but urges investment in A70

Ayr MSP John Scott has welcomed the release of figures by the A77 Safety Group which shows that the number of fatalities on the road halved over the last three years. 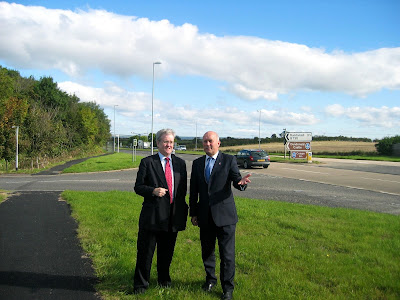 John Scott said: “The A77 has had an unenviable reputation over many years as being one of the most hazardous routes in Scotland, so the results published by the A77 Safety Group, showing a reduction in the overall number of accidents, is clearly very welcome.

“What we now need to see is progress being made on those remaining projects currently proposed in Transport Scotland’s works programme, including major improvements at Symington and Bogend Toll, realignment work between Dowhill and Chapeldonan, widening of the carriageway between Park End and Bennane and the provision of a dedicated northbound overtaking lane between Ardwell and Slockenray, all of which are needed to further improve safety on the A77.

“It goes without saying that a by-pass for Maybole must also be a top priority.”

Ayrshire Conservative MSP John Scott has also stepped up his calls for major investment in the A70 route between South Ayrshire and the M74, which he believes is crucial to the future economic development of the area.

Mr Scott has previously challenged Government Ministers to adopt the A70 as a trunk road, and now he has tabled a motion in the Scottish Parliament, which he hopes will win cross-party support from other Ayrshire politicians, calling on the Government to take responsibility for the maintenance and development of the A70.

John Scott said: “Trunk road status has seen considerable investment in several of the main arterial routes within Ayrshire including the A77, and other vital projects, including a bypass for Maybole, are expected to be progressed soon.

“However this scale of investment has not been possible where the A70 is concerned as the Government has no responsibility for it, and I believe that situation must change.

“The A70 is the main link eastward between southern Ayrshire and the M74, and as such it is a major economic development route. If we are really serious about realising the full potential of the Ayrshire economy, developing a transport infrastructure that can support the expansion of local businesses, and encouraging companies to locate to Ayrshire and generate much-needed jobs for local people, then major investment in the A70 must be a key priority.

“If the Government were to adopt the A70 as a trunk road then this could open the door to the level of investment in the route that is needed, and could bring enormous benefits over the long-term to local communities and our local economy.”

There are currently 390 Ayrshire business stories permanently archived on this site. To locate those of most interest to you, please use the site search facility in the top left hand corner of this page. Type your search term in the white box, then click “SEARCH BLOG”.