Irvine Bay Regeneration Company has announced a major step forward in delivering the £2.75 million regeneration package to transform the centre of Kilwinning.

The announcement of the main contractor on the project was made by Irvine Bay chairman Baroness Margaret Ford at the company’s Annual Public Meeting, which was attended by around 250 people.

This could also see an outdoor space created for markets and town events, as well as the creation of a business centre with accommodation for new businesses and links with James Watt College.

Land Engineering is to carry out the work as main contractor, and work on the first phase – the lighting – is already underway. 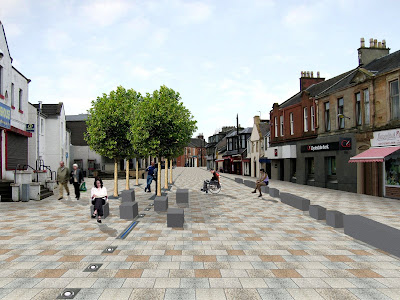 [Pictured: Artist’s impression of how Kilwinning Main Street will look after refurbishment. CLICK ON ANY IMAGE TO VIEW / DOWNLOAD FULL-SIZE VERSION.]

Baroness Ford said: “This project is the first where Irvine Bay Regeneration Company has built in targeted recruitment and training as part of the tender for a large contract. The refurbishment of Kilwinning Main Street will provide 12 skills-based training positions with 312 weeks of training. This will clearly be of benefit to the local community.”

The total investment in projects by Irvine Bay Regeneration Company is expected to be £4.5 million since last year’s meeting – with each £ of public money spent expected to leverage significant investment from the private sector.

Baroness Ford said: “Despite difficult economic times the regeneration company continues to work with its partners and stakeholders in the public and private sectors to drive progress for Irvine Bay.

“Our own investment has been substantial, but the long-term benefits will be greater still – such as the £50+ million development proposal announced for ‘The Ayrshire’ golf complex at Irvine during the past year.

“A further example of where our activity makes a real difference can be seen at The Lyric in Ardrossan, where the £350,000 the regeneration company has itself invested in preparing the building for development has ensured the development of this landmark goes ahead.

“Trinity Church is another project we are investing in, with a spend of around £250,000 committed to making wind and watertight this iconic building, doing some internal cleaning work and preparing it for development. There are a number of parties interested in taking this forward.

“Our contributions to local community projects have seen many projects that wouldn’t otherwise have gone ahead to happen, and these have made a real difference to local people – such as the Evolution bike track, Galloway Training Centre, and a grant made for Ayrshire fisherman to build a secure fence to protect their fishing gear.”

The annual meeting, at the Gailes Hotel, Marine Drive, Irvine, heard that Irvine Bay is well placed despite the economic downturn. 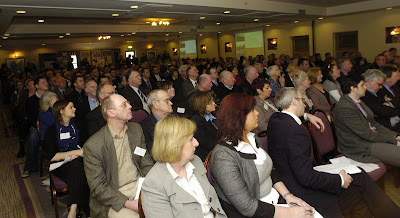 Chief executive Patrick Wiggins expressed confidence that the company’s creative approach to working with private and public sector partners will continue to bear fruit during the coming months, and that opportunities can be grasped. He said: “Irvine Bay benefits from having an Urban Regeneration Company in place, with its ability to make things happen.

“While we are not immune from the difficult economic times, the fact that our plans are long-term provides us with the ability to focus on important planning and preparation work, whilst helping to progress ongoing plans and developments.

“Because of the unique nature of URCs we can take a creative approach which allows us, for instance, to share both risk and potential profit with development partners.”

Those attending heard about significant progress since last year’s meeting, with highlights including:

The endorsement of the company’s Business Plan by the Scottish Government, assuring £6 million funding through till 2011. This money matches the investments already committed by both Scottish Enterprise and also North Ayrshire Council.

The regeneration plans for the five towns of Ardrossan, Saltcoats, Stevenston, Kilwinning and Irvine are complete and set the agenda for local development in coming years.

Mr Wiggins added: “There have also been clear signs of the impact that can be made in the towns, through the bringing back to life of previously disused buildings. In Princes Street, Ardrossan, buildings at 54, 56 and 93 have been reborn as shops and offices. We have also seen the town’s listed former pump house transformed into a bar and bistro at the harbour, bringing life and activity.

Last year, the company announced the £60+ million project to transform Irvine Harbourside with developers Urban Splash. Mr Wiggins explained that good progress continued to be made in the planning consultation around such a complex project.

There are currently 483 Ayrshire business stories permanently archived on this site. To locate those of most interest to you, please use the site search facility in the top left hand corner of this page. Type your search term in the white box, then click “SEARCH BLOG”.