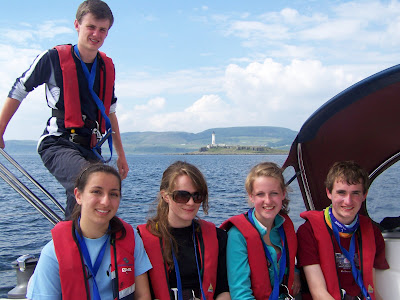 [Pictured: Mainholm and Marr College students at sea during the pilot programme.]

Expeditions for the Gold Award are traditionally done on land by walking or on bicycle. The Council gained permission from the Duke of Edinburgh’s Award national headquarters in Windsor, England to carry out a pilot programme.

Councillor Hywel Davies, Lifelong Learning Portfolio Holder for the Council said: “Sailing is a great way for young people to learn how to operate as part of team, to boost their confidence, learn to be resourceful and responsible for their actions.

“If this pilot programme is successful then sailing will become an option for participants in the Duke of Edinburgh Gold Award scheme across the United Kingdom as an alternative to walking or cycling, giving young people an alternative way to complete their Gold Award.

“This activity will also fit very neatly with the aims of the Curriculum for Excellence which encourages young people to become successful learners, confident individuals, responsible citizens and effective contributors to the community and society.”

This training was in preparation for a sailing expedition around the Firth of Clyde for their practice expedition at the end of June. During the practice expedition they learned to sail a 42 foot Gibsea yacht with yacht master instructor Jim Smith of the Central Scotland Sea School and South Ayrshire Council Duke of Edinburgh’s Award Development Worker Vincent McWhirter. Pupils learned to hoist sails, tack the yacht, navigate and every pupil took a turn at being the Skipper of the yacht for the day.

The qualifying expedition will start on 8 August 2009, students will take command of the yacht and sail it under supervision up the west of Scotland over four days and nights. The students, as well as completing their Gold Expedition Award, are also undertaking their Royal Yachting Association Competent Crew qualification, which enables them to help crew on other sailing boats.

The purpose of the Expedition is to investigate and help preserve the marine habitat of the west of Scotland and to do this the students will be completing their John Muir Award as the expedition theme. They will be learning about John Muir the Scottish environmentalist and creator of the National Park system in America. During their voyage they will participate in the Hebridean Whale and Dolphin Trust (HWDT) Community Sighting Programme, photographing, recording and collating the different species and numbers of marine life and cetaceans that they see and reporting it back to the HWDT office on Mull.

The photographs, videos and stories that the students gather on their voyage will be exhibited in the Rozelle House Galleries in October 2009 as a way of sharing their experience with others and raising the profile of marine conservation and the John Muir Trust.

To view a video diary about the pilot programme please log on to www.youtube.com/user/DOESailingScotland

There are currently 552 Ayrshire business stories permanently archived on this site. To locate those of most interest to you, please use the site search facility in the top left hand corner of this page. Type your search term in the white box, then click “SEARCH BLOG”.