SCOTTISH writer and broadcaster Billy Kay received an Honorary Doctorate from University of the West of Scotland at its graduation ceremony on Wednesday 1 July at Troon Concert Hall. 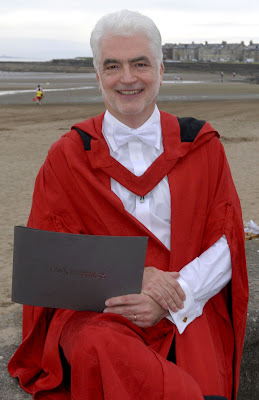 Billy Kay (pictured above) was born in Galston, Ayrshire in 1951, and educated at Kilmarnock Academy.

He joined the BBC as a researcher in 1979, then as a producer, he created the acclaimed Odyssey series of documentaries recording the oral history of the Scottish working class. Later as a freelance writer and broadcaster he continued this theme in a number of television documentaries for BBC Scotland. These included the story of Scottish colliers – ‘Miners’ and ‘The Mother Tongue’.

He has written two plays for radio and one for the stage, ‘They Fairly Mak Ye Work’ which broke box office records at Dundee Rep in its two runs at the theatre in 1986. He has poetry and short stories published in several Scottish anthologies.

In 1994 the UK Wine Guild gave the ‘Best Radio or TV programme’ award to Kay´s feature ‘Fresche Fragrant Clairettis’. In 1999 he made a television series on Scots for Channel 4 Schools – ‘Haud Yer Tongue’ and in 2003, he represented Scotland at the Smithsonian Folklife Festival in Washington DC.

Kay, who is an active member of the Cross Party Group on the Scots Language at the Scottish Parliament, presents and produces an average of ten new features per year on Radio Scotland. In 2006, Mainstream Publishing issued a brand new edition of his classic, ‘Scots: The Mither Tongue’ while his new book ‘The Scottish World’ was launched at the Edinburgh International Book Festival in August 2006.

Professor Seamus McDaid, Principal and Vice Chancellor of University of the West of Scotland said: “We are delighted to award Billy Kay with an Honorary Doctorate. He has made a significant contribution to Scottish culture and is a fitting recipient of this honour.”

There are currently 538 Ayrshire business stories permanently archived on this site. To locate those of most interest to you, please use the site search facility in the top left hand corner of this page. Type your search term in the white box, then click “SEARCH BLOG”.

Email ThisBlogThis!Share to TwitterShare to FacebookShare to Pinterest
Labels: University of the West of Scotland