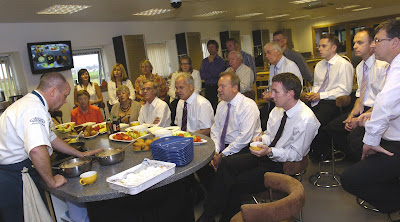 Members and guests were able to see how an expert chef prepares these dishes, and then sample the results fresh from the stove.

Elite Ayrshire Business Circle managing director Murdoch MacDonald commented: “Braehead Foods and their new venture the Cook School are fine examples of Ayrshire businesses at their most talented and dynamic, and they deserve every success.”

Steven Doherty acquired his eminent reputation working with some of the world’s greatest chefs. He began his cookery career at the Savoy in London and then moved to Le Gavroche where he cooked alongside the legendary Albert and Michel Roux, during which time Le Gavroche became the first Three Star Michelin Restaurant in the UK.

Albert sent Steven to work for two years with the late Alain Chapel in his restaurant at Mionnay near Lyon in France. On his return to Le Gavroche Steven became the first ever British Head Chef of a Three Star Michelin Restaurant. During the next five years Le Gavroche won every major European food accolade.

Relocating to The Lake District in 1993, Steven was at the forefront of the Gastro Pub movement and went on to win both national and local food awards, inspiring others to follow his lead. Currently he is Chef/Proprietor at Lakeland in their purpose built First Floor Café and flagship store in Windermere, Cumbria.

Steven has been appointed as managing director of the Cook School at Braehead Foods, Kilmarnock. In a consulting role, Steven’s aim is that the Cook School can look to establish itself as one of the leading cook schools in Scotland and the UK as a whole within the next three years and will look forward to achieving this target.

There are currently 542 Ayrshire business stories permanently archived on this site. To locate those of most interest to you, please use the site search facility in the top left hand corner of this page. Type your search term in the white box, then click “SEARCH BLOG”.

* * *
Posted by Ayrshire Scotland Business News at 7:18 pm No comments: 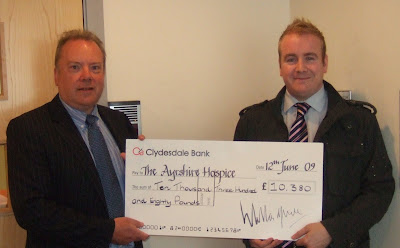 The event was held at Belleisle Golf Club, followed by lunch at Ayr Racecourse. 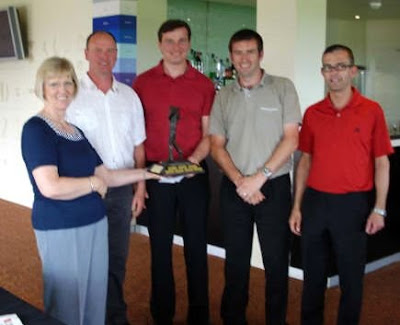 Ayrshire Hospice fundraising manager Louis Jardine commented: “To once again achieve such a fantastic amount, especially in the current difficult economic conditions, is really quite outstanding.

“The Elite Ayrshire Business Circle is an organisation that is going from strength to strength, and I would like to thank all their members who participated so enthusiastically in the Golf Day again this year.

“And special thanks to everyone at the Clydesdale Bank for their support, particularly event organiser David Jellema, without whose hard work the Golf Day would not have been the success it was.

“All the money raised will go straight to directly helping the Ayrshire Hospice to continue to provide care and service to the terminally ill within our community.”

Elite Ayrshire Business Circle managing director Murdoch MacDonald said: “Our members are unanimous in their support for the work that the Ayrshire Hospice does in our community, and we look forward to holding another successful event on their behalf next year.”

There are currently 541 Ayrshire business stories permanently archived on this site. To locate those of most interest to you, please use the site search facility in the top left hand corner of this page. Type your search term in the white box, then click “SEARCH BLOG”.