Scotland must become the green energy powerhouse of Europe

SCOTLAND needs the power to manage its own natural resources so that it can become the energy powerhouse of Europe, First Minister Alex Salmond says in his New Year message.

Mr Salmond predicted a ‘renewables revolution’ emanating from a Scotland which had won the ‘natural lottery’ - with wind, wave and tidal resources offering the capacity to produce some 10 times Scotland’s own electricity requirements.

The First Minister pointed to the Climate Change Act - setting legally binding targets to cut Scottish greenhouse gas emissions by 42 per cent and 80 per cent by 2020 and 2050 respectively - as the most important legislation passed by the Parliament in 2009, even although world leaders in Copenhagen had failed to commit fully to a way forward.

“Many countries saw the lead that Scotland was taking as an example of the legislation and of the action that must be taken to protect our planet collectively. Despite the disappointment of Copenhagen, people power internationally will force political leadership to commit to the ambitious targets for their countries that Scotland has already set."

But the FM added that Scotland must get the benefit of its own resources if it was to become a major exporter and the energy powerhouse of the Europe.

He said: “Even now, we’re being held back in the exploitation of these renewables because we now have to pay in Scotland much higher connection charges to the electricity grid than companies have to pay south of the border. That’s totally unfair and totally unacceptable.

“If we're going to make the most of this renewable revolution, then we’re going to have to have equal access to the grid - and the powers for our Parliament to secure that proper access.

“And that’s why it’s important, as we move into this New Year, that the people of Scotland are given their say in making sure that their Parliament can extend its powers to have the ability to mobilise the resources of Scotland for Scotland’s benefit.

“The referendum on the constitution is not an abstraction - it’s not something for politicians. It’s something for every person in Scotland. Because if we’re going to harness the power of Scotland, then we need to give Scotland power.

“So this Ne’er Day, as we look forward to 2010, I’m wishing you a happy New Year - renewing the energy of Scotland, renewing Scotland as a country. Have a guid New Year.”

The Climate Change (Scotland) Bill was passed unanimously by the Parliament. The legislation creates a long-term framework that:

The Scottish Government has also set green energy targets, including meeting 50 per cent of electricity demand from renewable sources by 2020. With 6.5 Gigawatts of renewables capacity installed, consented or under construction, Scotland has surpassed the interim target of 31 per cent by 2011.

The current charging regime requires electricity generators in Scotland to pay the UK's highest transmission costs, while in parts of the south of England companies actually receive a subsidy. Generators in the north of Scotland face charges of around £21.58 per Kilowatt Hour, yet those in London receive £2.70 per kwH while more than twice that subsidy (£6.68) is paid out to firms in Cornwall, according to National Grid’s own figures.

This means that Scottish generators produce 12 per cent of UK generation, but account for 40 per cent of the transmission costs - or about £100 million per year more than their proportionate share.

The First Minister highlighted concerns that the charging regime creates a significant and fundamental barrier to encouraging renewable energy development in Scotland during his meeting with EU Energy Commissioner Andris Piebalgs in Brussels last month. The National Grid has rejected Scottish Government proposals to adopt a flat rate charge for use of the system but Ministers continue to engage with National Grid and Ofgem to find a way forward.

On November 30 the Scottish Government published a White Paper - Your Scotland, Your Voice - setting out options for Scotland’s constitutional future and paving the way for Ministers to bring forward a Bill in 2010.

There are currently 631 Ayrshire business stories permanently archived on this site. To locate those of most interest to you, please use the site search facility in the top left hand corner of this page. Type your search term in the white box, then click the magnifying glass symbol.

ARPL Architects Ltd announce that scaffolding has gone up and repair work started on the tower and spire of B-listed St Andrew’s Parish Church in Ayr.

A Heritage Lottery Fund grant has been received for the repair of stonework, finial and stained glass, work which is due to be completed by late Spring 2010. 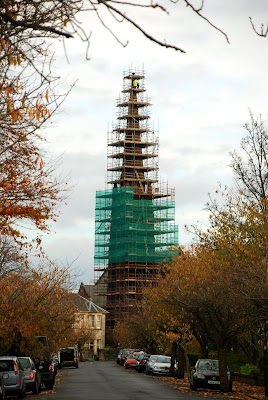 The project architect, Lynne Yuille of ARPL Architects Ltd, is seen above at the top of the scaffold carrying out detailed inspection for the £150K repair work.

The congregation of St Andrew’s Church, Ayr were very pleased to be awarded a grant from the Heritage Lottery Fund to cover 2/3 of the costs of the work. The main contractor for the project is Fleming Masonry Contractors Ltd of Glasgow, who are specialists in conservation work.

Earlier this year steeplejacks carried out emergency stabilisation of the finial and crown stone at the top of the spire, and the project as a whole was started after storm damage to the tower louvres.

ARPL Architects Ltd director in charge of the project Rebecca Cadie said: “We are very pleased to get this local landmark project on to site, and despite the winter weather, good progress is being made to repair the finial, spire, bell louvres and large west window.

“Grant funding has been hard to win in the last year, and the congregation of St Andrew’s are thrilled that it has been given in recognition of the importance of this building’s contribution to Ayr’s townscape.”

The ARPL philosophy is to produce buildings to the highest design standards in close consultation with its clients. Designs are innovative and sympathetic to both the immediate and the broader environment in which they are constructed, with an emphasis on sustainability. Each project embraces the unique nature of the client’s needs and the site.

Over the 36 years since Patrick Lorimer established the original practice, ARPL’s status in the profession has grown steadily in line with its position as a medium-sized practice with a reputation for well executed projects. From its base in Ayr the practice carries out projects over a wide geographical area from the Orkneys and the Western Isles to Ireland.

ARPL’s work has received wide recognition through numerous design and environmental awards presented over the years for its new build and conservation works. Regular success in design competitions adds to the practice portfolio.

ARPL are currently working on new and refurbishment housing for Lochside, Ayr, several church and castle conservation and restoration projects and new community facilities in the South West of Scotland. Appointments for church commissions involve a range of denominations and projects from conservation and repair to extensions and new build. The firm is also involved in country houses and estates and the design of new houses for private owners.

The practice typically handles projects with construction values ranging from £100k through to £15m.

ARPL directors have managed to keep their business stable during the current difficult times, and have a busy current workload.

ARPL Architects Ltd is a founder member of the Elite Ayrshire Business Circle.

There are currently 630 Ayrshire business stories permanently archived on this site. To locate those of most interest to you, please use the site search facility in the top left hand corner of this page. Type your search term in the white box, then click the magnifying glass symbol.

* * *
Posted by Ayrshire Scotland Business News at 6:37 pm No comments: