AYR resident Dr Charles Amarety Aryiku, (58) has been commissioned as Scotland’s first Honorary Consul-General for Ghana, at a ceremony in the City Chambers in Glasgow. The ceremony was conducted by His Excellency, the Ghana High Commissioner Professor Kwaku Danso-Boafo.

Dr Aryiku, although taking on the role of Honorary Consul-General of Glasgow in a voluntary capacity, has lived and worked in Scotland for many years, and has lived in Ayr for over 20 years.

The home of Dr Aryiku now has a brass plaque which informs people of his new position. In addition a distinctive Ghanaian flag is being flown on the front of his home. 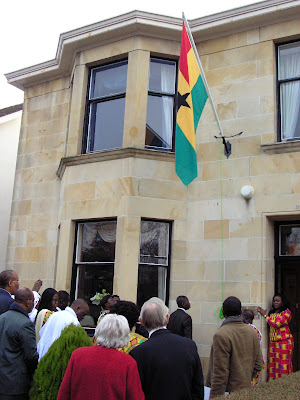 Dr Aryiku's new role is to protect the interests of Ghanaians and promote the mutual interests of the Republic of Ghana to Scotland.

Speaking about the event, Dr Aryiku said: “I came to the conclusion that this would be a wonderful opportunity to be of service to my motherland Ghana by giving something back.

“At this stage of our national development Ghana has a lot to learn from Scotland. Ghana is still a developing country. Therefore, as the first Consul-General of the Republic of Ghana in Scotland, I hope, first and foremost, to help promote the good name of Ghana in Glasgow, to encourage friendly relations and promote tourism, trade and education. I will also have the responsibility to protect the interest of all Ghanaian nationals resident in Glasgow.

“Many Ghanaians have passed through the city in their training in the fields of medicine, engineering, architecture and agriculture.”

It is estimated that there are between 3,000 to 4,000 Ghanaians living in Scotland. However one of the functions of the Honorary Consulate is to help the High Commission build an accurate register of Ghanaians who live in Scotland.

Councillor Ian Douglas of South Ayrshire Council was at the ceremony in Glasgow, and at the unveiling of the plaque at Dr Aryiku’s home. He said: “This is a proud moment for the town of Ayr and Scotland in general. To have the Consul-General for the Republic of Ghana, a country which has gone from strength to strength since it gained its independence from London rule in 1957, choose to live in Ayr is indeed an honour. Ghana has a lot in common with Scotland, oil and friendly outgoing people. I look forward to the opening of doors both in the tourist sector and the world of commerce and industry between our countries.” 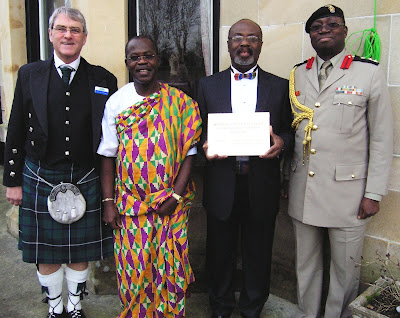 Dr Aryiku is a Consultant General Adult Psychiatrist with interest in the treatment of depression and related conditions with a particular interest in Post Traumatic Stress Disorder.

He completed his undergraduate education in Ghana where he qualified as a doctor in 1975.

Four years later he gained a Commonwealth Scholarship for post-graduate training in Psychiatry at the Royal Edinburgh Hospital.

That is when he fell in love with Scotland – its culture and its people.

Following his final Royal College of Psychiatrists membership exams in 1982, Dr Aryiku worked in the Scottish Borders for two year before proceeding Cambridge in East Anglia for further training.

His love for Scotland saw his return in 1986 to take up his first Consultant job with the then Forth Valley Health Board.

Four years later in 1990, he moved westward to Ayrshire to take up his current job with NHS Ayrshire and Arran. He and his family have lived in Ayr for nearly 20 years.

He has served as a member of the Board of Governors for Hansel Village, a Charitable Organisation for people with Learning Disabilities.

He also served as the psychiatrist for the refugees at Dungavel Detention Removal Centre, for a period of five years up until 2006.

There are currently 654 Ayrshire business stories permanently archived on this site. To locate those of most interest to you, please use the site search facility in the top left hand corner of this page. Type your search term in the white box, then click the magnifying glass symbol.