PEOPLE from South Ayrshire marked Armed Forces Day by lining the streets of Ayr to show their respect for serving and veteran members of Her Majesty’s Armed Forces on Saturday. 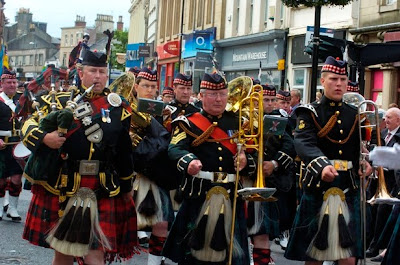 Following a flag raising ceremony and an inspection of the ranks members of the armed forces marched through the streets of Ayr to the Wallace Tower. South Ayrshire Provost Winifred Sloan then presented a newly commissioned pipe banner displaying the council’s coats of arms to The Royal Regiment of Scotland 2 Scots on their bagpipes. Following an official salute the parade marched through the town and dismissed in Wellington Square. 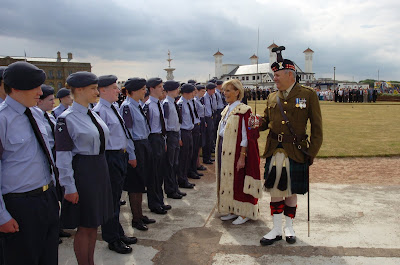 Provost Sloan said: “South Ayrshire has very strong ties with the armed forces and we were keen to show our support for serving officers, veterans and their families. I was very proud to see such a strong turnout.

“People on active service daily put their lives on the line while serving their country and they deserve our support then and when they leave the forces. I am the Council’s Veterans’ Champion and know how important it is that we look after the men and women who have previously serviced in the forces.

“We are already looking ahead to Armed Forces Day 2011 and are discussing ideas for how we can celebrate the day in innovative and exciting new ways. As soon as the plans are formalised we will let you know so that as many people as possible can be part of the day and show their support for our present and past servicemen and women.” 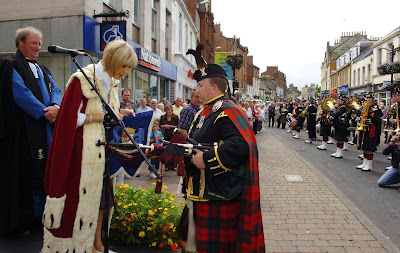 In June this year Provost Sloan, Veterans Champion for the council met with various third sector organisations that provide support for veterans and serving personnel of our armed forces. Organisations such as the Royal Air Force Association; British Legion; Forces Family Support; Combat Stress; Gardening Leave; Armed forces Veterans Association as well as public sector departments such as housing, community development, job centre plus, housing aid, came together to propose a plan of action that would enhance the services already provided, by producing a Director of Services and campaign for a ‘One Stop Shop’ in central Ayr, to signpost and support veterans young and old in coping with the present stresses of our armed services personnel.

Speaking about her role as Council Veterans Champion Provost Sloan said: “The wellbeing of servicemen and women is very close to my heart. These people have served their country, put their lives at risk and often suffered mental trauma or physical injury.

“I am an advocate for the veterans, I want to ensure that people the length and breadth of South Ayrshire, and beyond, understand the difficulties that people and their families can face after they leave the forces.

“Working closely with other agencies, a drop-in centre for services personnel has been set up at Yeomanary House. Meetings take place each month on the last Wednesday of the month at 12 noon and 6.30 pm.

“Celebrations such as Armed Forces Day are a great way to show our respect for members of the armed forces, present and past, however we must remember that they need our support all the year round.”

6 SCOTS Commanding Officer Lieutenant Colonel Charlie Platt said: “The Armed Forces Day in Ayr was a fantastic event.  It was tremendous that it was so well supported by the people of Ayrshire. Such a public display of support for the armed forces, veterans and their families means a great deal to us all.  Thank you to South Ayrshire Council for making it all possible.”

There are currently 732 Ayrshire business stories permanently archived on this site. To locate those of most interest to you, please use the site search facility in the top left hand corner of this page. Type your search term in the white box, then click the magnifying glass symbol.