More than 20,000 descended on the track over the three day extravaganza and enjoyed a heady mix of top class sport, entertainment, fun and glamour, plus a visit from Scotland’s First Minister Alex Salmond.

The weather held up, and hotels, bars, restaurants and taxi companies reported one of their best September weekends for many years. And on Saturday the Racecourse reported hospitality was sold out.

The glamour of the occasion was underlined on Friday - Ladies Day - and what a success that proved to be, with more than 5,400 attending.

The excitement grew throughout the afternoon as the big race of the day approached - the William Hill (Ayr) Bronze Cup - because by that time 27 lucky ladies each had a bronze coin and picked the name of a horse from a tombola drum. 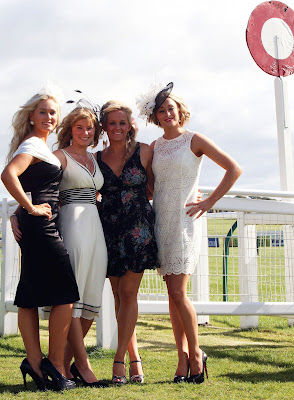 All eyes were ion the race as the ladies followed the fortunes of their horse. The lucky winner was Gourock woman Lucy Stuart who had drawn the name of Cheveton from the drum and the horse duly won. 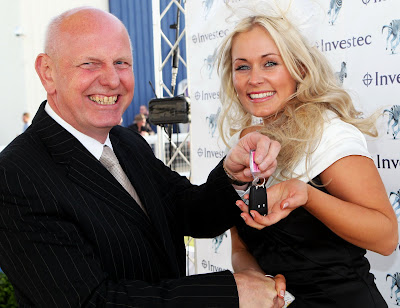 Lucy won a brand new Vauxhall Astra courtesy of Kerr & Smith and Iveco Trucks and was presented with the keys to her prize by Jim Smith (pictured above) of Kerr & Smith who have now backed Ladies Day at Ayr for three years.

The fun continued after racing with performances from Jamie ‘Afro’ Archer of X Factor fame and also the highly rated local band Waterfront.

And the First Minister also spent a considerable amount of time chatting to the huge crowds – more than 12,300 attended on Saturday.

Huge roars echoed round the course when Frankie Dettori steered his horse Redford to victory in the Gold Cup and he later admitted he almost decided to stay at home after forgetting his passport and not being allowed on a Ryanair flight from Stansted to Prestwick.

Alex Salmond quipped: “I told Frankie he didn’t need his passport to get into Scotland – he is welcome here anytime.”

The party continued on Saturday with appearances from Madness and Abba tribute acts and the Floorstompers.

Ayr Racecourse Marketing Manager Lindsey Smith said: “We couldn’t have scripted it better with Frankie winning his second successive William Hill (Ayr) Gold Cup. The crowds were terrific and the atmosphere was spot on.”

There are currently 777 Ayrshire business stories permanently archived on this site. To locate those of most interest to you, please use the site search facility in the top left hand corner of this page. Type your search term in the white box, then click the magnifying glass symbol.

Posted by Ayrshire Scotland Business News at 11:51 am