Soldiers from the 1st Battalion Scots Guards, returning home from a tour of duty in Afghanistan, have been welcomed in the streets of Ayr by hundreds of well wishers.

The Battalion has a long association with South Ayrshire, and the parade was organised to give local residents the chance to express their support for the troops, returning home from active service in Afghanistan. 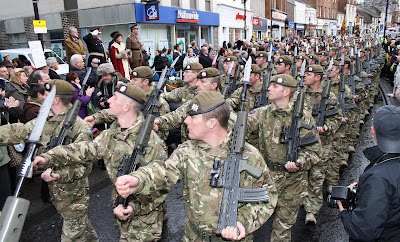 The Scots Guards were granted the Freedom of the District by Kyle and Carrick District Council in 1979, and the 2010 homecoming parade was the first time they have exercised their right to march through Ayr with fixed bayonets. 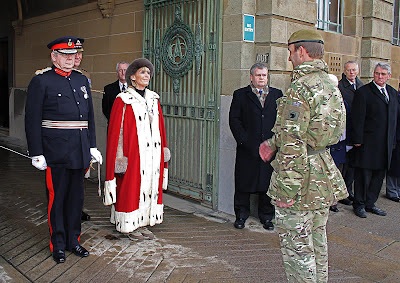 Assembling at County Buildings, the Battalion was inspected by South Ayrshire Provost Winifred Sloan, before moving off along Pavilion Road, Barnes Street, Dalblair Road, Alloway Street and onto Ayr’s High Street, where Provost Sloan took the eyes-right salute at the Wallace Tower.

The Battalion continued their parade along the High Street, flanked by scores of people cheering and applauding them, arriving at Ayr Town Hall, where Provost Sloan hosted an informal reception.

Provost Sloan said: “I was delighted so many people in South Ayrshire turned out to support the 1st Battalion Scots Guards, returning home after a particularly difficult tour of duty.

“Veterans, service personnel, families, friends and local residents took to the streets to give our troops a heartfelt and warm South Ayrshire welcome home as they return to their loved ones in time for Christmas.

“It was a great privilege to take part in the Battalion’s salute to the Lord Lieutenant of Ayrshire at the Wallace Tower and I was proud to mark their first parade with a reception at the Town Hall.”

Commanding Officer of the Battalion Lieutenant Colonel Lincoln Jopp said: “It is a great pleasure, and indeed an honour, for the Scots Guards to be able to come back home to Scotland and to share the joy of our homecoming with the people of South Ayrshire.


“While we were over in Afghanistan we were inundated with love and support from home, and had a great sense that people back in Scotland were rooting for us every step of the way.

“Our mission was incredibly difficult, and there wasn’t a day that passed when I did not marvel at just how fantastic these brave young Scots Guardsmen are. I am so proud of every single one of them, and I know that Scotland is too. So it’s great to be able to share that pride.”

Provost Sloan concluded: “As we welcome the Scots Guards safe homecoming, it is appropriate to look back and remember those who made the ultimate sacrifice for us, their colleagues, the Battalion and their country.

“For some families, the festive season will be a sombre and difficult time, remembering loved ones who did not come home, or those brave men and women injured or maimed in combat.

“I hope all service families receive the love and support they need to move on with their lives, and trust this break from duty will give all Scots Guards a well earned chance to rest and recuperate from the rigours of service in Afghanistan.

“On behalf of the people of South Ayrshire and the Council , I would like to wish the Battalion a restful Christmas and a Happy New Year.”

There are currently 811 Ayrshire business stories permanently archived on this site. To locate those of most interest to you, please use the site search facility in the top left hand corner of this page. Type your search term in the white box, then click the magnifying glass symbol.