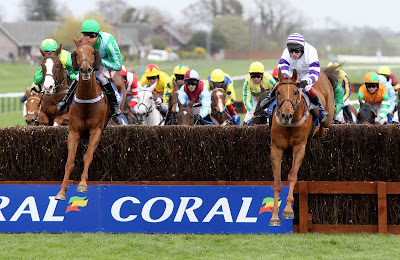 Victory was sweet for Johnson as he gave Beshabar, a 15/2 shot, a copy book ride leading from the front most of the way and holding off a relentless challenge from last year’s winner Merigo.

Trained in Wales by Tim Vaughan, Beshabar came into the race on the back of a second in the National Hunt Chase at Cheltenham to Chicago Grey, sent off the 11/2 favourite on Saturday but on the day there was no contest between the two this time with Johnson's horse a massive 50 lengths clear of Chicago Grey.

Up in the van throughout, Beshabar hit the front at the seventh fence and held off Merigo (20/1) and third placed Always Right (15/2) by three quarters of a length and a neck. 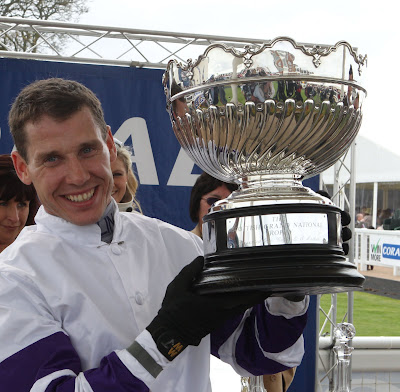 Speaking after receiving the trophy, Richard Johnson said: “I| have had some big winners at Ayr over the years but its a great feeling to have won the Coral Scottish Grand National for the first time. The course really suited my horse and while I wouldn’t say I was over confident of defeating Chicago Grey this time I was confident mine would run a big race and he certainly did.

“I kept hearing Merigo and Timmy Murphy behind me, but my horse kept giving me more and although he idled after the last he deserved his win.”

Raymond Anderson Green, owner of Merigo, commented: “My horse lost nothing in defeat and was effectively 15lb out of the handicap. I am very proud.”

The main supporting race on the card, the Isle of Skye Blended Whisky Scottish Champion Hurdle was won by the Paul Nicholls trained, Ruby Walsh ridden Sanctuaire (9/2 jt fav) by a length and three-quarters from Bygones of Brid (14/1), the mount of Graham Lee.

Lee was the top jockey of the meeting though, landing a double on Saturday with Gilbarry (8/1) in the Scottish Sun Future Champion Novices Chase and Beggars Cap (14/1) in the Scotty Brand Handicap Chase. The jockey also won the Friday feature the Hillhouse Quarry Handicap Chase on board the 14/1shot Watch My Back.

The crowd was 15,000 on Saturday and 4,800 on Friday and Ayr Racecourse sales and marketing manager Lindsey Smith commented : “It was a highly successful two days and the weather held up for the meeting too which was good.”

Ayr's next meeting is on Wednesday 25 May and Thursday 26 May – Spring Raceday and Blue Square Raceday respectively – the start of the flat season at the track.