Veterans First Point Ayrshire has been established to support veterans, their families and friends, to support servicemen and women whether they have just left the armed forces recently or years ago. A booklet that was launched at the event was created to help veterans and their families. Containing information and contacts on housing, health and welfare, mental health, finance, careers and much more it quickly directs people to where they can get advice, guidance and support. 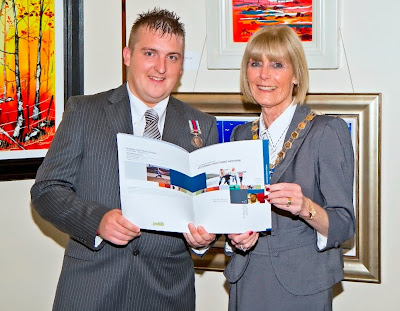 Speaking at the event Provost Sloan said: “Today’s event reflects the hard work and dedication of a range of organisations who were determined to bring about the creation of Veterans First Point Ayrshire.

“Veterans, their families and friends will now be able to access free advice, guidance and support that will help them when they leave the armed forces. No matter how long they have served in the armed forces. Our servicemen and women need and deserve support when they make the transition to civilian life and that support needs to be sustained for years to come. These people are willing to literally lay down their lives for their country and we have a responsibility to be there for them when they need it.

“The new Veterans First Point Ayrshire information booklet is just the start. Specially created and packed with information on who to contact for advice or guidance about a range of topics including finance, housing, health and employment the booklet is great, it will be invaluable to veterans, their families and friends with at a glance contact details.

“However there’s much more to come and we are already looking for permanent premises to create a drop-in centre for veterans and their families. This is just the start of more support for our deserving veterans.

“Veterans First Point Ayrshire is run by veterans for veterans, so there are people ready to help who really understand what veterans go through. I’m sure this new support network will be a great success and I look forward to continuing to work with all the partners involved to ensure that’s achieved.”

He said: “I am delighted to be part of the team who is going to be running it. As an injured soldier I know what it is like to come back from Afghanistan with mental health problems, money problems etc. I have had help but nowhere near as much as Veterans First Point Ayrshire is offering which I find amazing because I know there are people out there who are interested in helping armed services men and women. It is great because it’s going to be run by veterans for veterans who may have been through the same problems. I strongly believe in the services they are offering – fantastic!”

Falklands veteran and artist John Damari also took part in the launch. He is actively supporting Veterans First Point Ayrshire by exhibiting his artwork in the Council Chamber at Ayr Town Hall until Tuesday 28 June. Entry is free and his work will be for sale. John is donating 50% of all exhibition sales to the veterans. 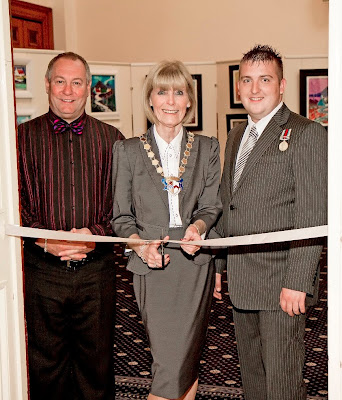 John Damari said: “I am delighted as an artist to have the skills to create wonderful landscapes in support of Veterans First Point Ayrshire. I am sure that the proceeds from the paintings will be put to a very good use, so the veterans can benefit from funds raised by those wishing to support them. Servicemen and women who travel all over the world in support of our nation deserve our support. It is a great privilege for me to be part of such a wonderful support network for our veterans and to have the support of South Ayrshire Council, Provost Sloan and everyone else involved in Veterans First Point Ayrshire.”

South Ayrshire Council is a founder member of the Elite Ayrshire Business Circle.