South Ayrshire Council today (Friday 11 November) achieved a world’s first for a public library service with the launch of its very own e-book.

The e-book, ‘The Record of the Ayrshire Militia 1802-1883’, is now available for sale on Amazon, making South Ayrshire’s local history information accessible to a global audience for generations to come. 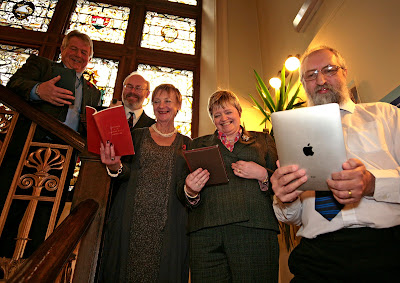 Launched by esteemed Scots historian and Director of the Paradox of Medieval Scotland (POMS) project – Professor Dauvit Broun from Glasgow University – the e-book was originally privately printed in 1884 and is based on hand-written records in a notebook kept in Ayr barracks.

Its 114 pages consist of a year-by-year account of the activities of the Ayrshire militia from its formation in 1802, including details of the regiment’s Napoleonic war service in Scotland, England and Ireland.

And the important world-first has already been endorsed by the Earl of Stair who said: “Congratulations on this wonderful initiative and well done for seeing it through.”

South Ayrshire Council currently owns one fragile print reference copy of the book, which was written by Hew Hamilton-Dalrymple, and is much in demand due to a growing interest in genealogy and family history research thanks to programmes such as the BBC’s Who Do You Think You Are?

The launch of South Ayrshire Council’s ebook means the content is available for purchase and download by anyone, anywhere and anytime and it can be read on laptops, smartphones and all e-readers such as the Kindle.

It will also be available on loan – free of charge – to South Ayrshire libraries’ members thanks to the Council’s popular ebooks library service, which launched last year.

Professor Broun said: 'Jean Inness and South Ayrshire Council have for many years been at the forefront of making links between scholars of Scottish history and local historians in the annual Local History Fair.

“In this latest exciting innovation she has taken this to the next level by making a priceless source for local history, of interest to anyone with a serious interest in nineteenth-century British history, available across the world to everyone with access to the internet.

“In the same way as university researchers are making Scottish history accessible through the web, for example, there are currently on average 25 people every day who use the Paradox of Medieval Scotland website.

“It is wonderful now to see local libraries, led by South Ayrshire, find a way to make their own treasures available everywhere.”

Councillor Margaret Toner, South Ayrshire Council’s Portfolio Holder for Leisure said: “This book is another impressive innovation from our libraries service, and one which – as far as we can establish having checked with colleagues around the globe – is the first of its kind anywhere in the world. Not only that, it’s a fascinating read too!

“Our approach opens up a whole new world, not just to those interested in local or family history but also to libraries across the globe. If other libraries followed suit, we would have the potential for no book to ever have to go out of print. Effectively it helps these books live forever. This is a real step forward for the libraries of the future and I’m delighted South Ayrshire has the honour of being the first to take this forward.”

South Ayrshire Council’s achievement has been welcomed around the world:

Sally Pewhairangi, a library project management consultant from New Zealand, said: “Congratulations to South Ayrshire for taking the next step by commercially publishing local history material. Ebooks and social media enables libraries to place their collections into the hands of enthusiastic historians and genealogists regardless of where they live and those of Scots descent in particular will find this book, and subsequent titles, very useful.”

Rhona Arthur, Assistant Director of the Chartered Institute of Library and Information Professionals in Scotland/Scottish Libraries Information Council, concluded: “We welcome the way in which South Ayrshire’s libraries service has embraced the advent of e-books, both as a lender and now as a publisher.

“E-books are a flexible format which means they are very accessible for people and available from the library catalogue 24/7. Publishing local material until now has meant low print runs and high unit costs. This is a great way of publishing books – which may have a global audience as well as a local one – without the costly overheads.”

Martyn Wade, National Librarian and Chief Executive of the National Library of Scotland, said: “South Ayrshire are to be congratulated on this terrific, innovative step. Libraries across the country have many treasures and important volumes such as the Record of the Ayrshire Militia in their collections and it is very good to see them embrace new ways of ensuring as many people as possible can access these.”

Records of the Ayrshire Militia from 1802 to 1883 is available from www.amazon.co.uk, priced £6.99. South Ayrshire Council has also teamed up with a company called Lightning Source who can print copies of the book on demand. Print copies can be ordered from the Carnegie Library in Ayr.

Dauvit Broun (David Brown) (born 1961) is a Scottish historian and Professor of Scottish History at the University of Glasgow.

A specialist in medieval Scottish and Celtic Studies, he concentrates primarily on early medieval Scotland and has written abundantly on the topic of early Scottish king-lists as well as on literacy, charter-writing, national identity and on the text known as de Situ Albanie.