HE’S worked in some of the best hotels in Europe and been taught by legendary chefs, and now Donald McInnes has brought his culinary skills and knowledge to Ayr and wants everyone to share the experience. 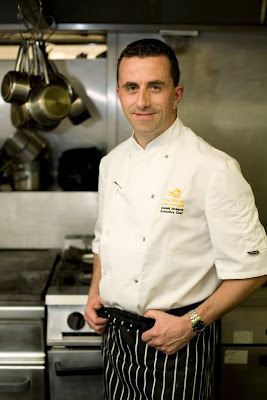 He was appointed Executive Chef of the four-star Western House Hotel and Ayr Racecourse late last year, and has more than 20 years experience in top hotels in the UK and Europe.

From the age of 11 Edinburgh-born Donald liked experimenting in the kitchen and cooking meals for his family, and after leaving the city’s Telford College he landed his first job as a trainee chef in the George Hotel, Edinburgh.

His career then took off on an upward curve with stints at the Intercontinental Hyde Park and later the Savoy, both in London, working with such luminaries as Peter Kromberg and Anton Edelmann.

Donald admits it was a superb education to be working with such kitchen legends. He said: “To be in the same kitchen as chefs like those made my ambitions even greater, and soon afterwards I moved to Europe for several years to further broaden my outlook and gain more invaluable experience.”

The first stop was at the Intercontinental in Geneva in the kitchen of the Michelin restaurant there, and then it was onto Lyon in France under the tutelage of another legendary chef Paul Bocuse with whom he spent more than three year as Commis Chef.

This was a period in his career that he looks back on with pride. He said: “Paul Bocuse’s whole work ethos rubbed off on me. The French love their food and wine with a passion that’s hard to match. Its all about presentation and delivery.

“If Switzerland taught me a lot about myself as a person, then France taught me loads about working with local producers to produce a menu.”

On returning to the UK in 1996 Donald spent three and a half years at Cameron House Hotel on Loch Lomondside, firstly as Junior Sous Chef and later as Senior Sous Chef.

He then become Head Chef at Lochgreen House Hotel in Troon and later left for a similar post at Gleddoch House in Langbank, and then onto the Malmaison in Glasgow where he was appointed Head Chef in 2002.

After four to five years in that post Donald took on a role as Group Training Executive Chef for Malmaison and Hotel du Vin which saw him overseeing the training of staff at the group’s 26 hotels.

Family man Donald - he has two young children - decided the time was right to take on a new challenge and plumped for the opportunity to be Executive Chef at Western House Hotel and Ayr Racecourse, and he is relishing his new role.

He said: “What appealed to me about being Executive Chef at Western House and the Racecourse was the sheer volume. To prepare and serve the quality of food at the volume we do is a huge challenge, but one I’m enjoying.

“To provide quality food for a two-rosette restaurant - the Jockey Club Restaurant, Banqueting and Racecourse hospitality requires a special team, and I believe I have that here. I am marrying the skills of the chefs to my thought processes, professionalism and passion to produce the perfect match.

“Quality sells, and we have that here. I also have a love and passion for provincial food - something I nurtured while in France - and I have mostly local suppliers here. We source our beef from Dalduff, our salmon locally, and our fresh vegetables from Alistair Grant in Prestwick. All of that is important to me.”

There are currently 818 Ayrshire business stories permanently archived on this site. To locate those of most interest to you, please use the site search facility in the top left hand corner of this page. Type your search term in the white box, then click the magnifying glass symbol.

Posted by Ayrshire Scotland Business News at 5:52 pm No comments: