A spectacular ‘living space’ exhibit made from re-used furniture has scooped the prestigious Provost MacDonald Trophy and a Gold Medal at the Ayr Flower Show. 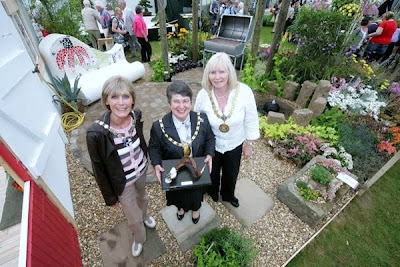 Based on the theme of re-use, a topic which is being strongly promoted by Zero Waste Scotland, the exhibit showcases a ‘living space and garden’ design complete with sofa, coffee table, TV stand and fireplace. The ‘garden’ half of the exhibit will feature beautiful floral displays, a Gaudi-style bench, water fountain, paving, table and chairs and barbecue.

To demonstrate the creative use of everyday objects, every item is either fully re-used or made of re-used material while the floral displays will also be re-used and re-planted. The garden highlights a commitment to promote reuse through effective working relationship between North, South and East Ayrshire Councils and other agencies, including Cunninghame Furniture Recycling Company, Energy from Waste, Re-Paint Scotland and Killie Can Cycle.

Speaking on behalf of the three authorities, Provost Pat McPhee said: “We are all delighted that the three Ayrshires have won this prestigious trophy once again. The effort and creativity that has gone into the exhibit is there for everybody to see and highlights a very important issue.

“People across Ayrshire are becoming more and more aware of the importance of recycling their waste.

“However, re-using goods can play just as important a part in tackling waste and its impact on the environment. Of course, re-use is hardly a new concept. People have re-used and passed on items for years.

“But becoming aware of how re-use can help to protect the environment and reduce waste is vital. We can re-use so many different things – as shown in this year’s exhibit. It also means that items don’t even reach the bin – the best possible result for costs and the environment.

“I would encourage everyone to re-use and recycle where possible and help to make sure all three Ayrshires play their part in helping to reduce the amount of unnecessary waste going to landfill.”

During the show the Councils will be on hand beside the garden to provide advice on re-use and recycling, along with information on each Council's waste services.

Marina Fraser, Zero Waste Scotland’s Regional Partnership Manager for West Scotland, said: “Getting better at preventing waste must be a top priority if we are to achieve our vision of zero waste in Scotland. The good news is that waste prevention, particularly through reuse, holds great potential for everyday people to save money, find something unique, or support a good cause.

“Ayrshire has so many fantastic reuse organisations operating locally, and it’s fantastic to see them all coming together as part of the Councils’ Garden to promote their work.”

In 2010 a joint “Love Food Hate Waste Garden”, created with support from Zero Waste Scotland, won both the premier Provost MacDonald Trophy and a Gold Medal.

The Ayrshire councils have been working in partnership since 2004 on a joint sustainable waste management project. Together the councils aim to encourage and enable the public to Reduce, Reuse and Recycle wherever possible in order to reach Scottish Government target to reach a 70% recycling rate by 2025, with only 5% of waste heading to landfill, and to achieve a Zero Waste community in Ayrshire.

Posted by Ayrshire Scotland Business News at 4:05 pm No comments: 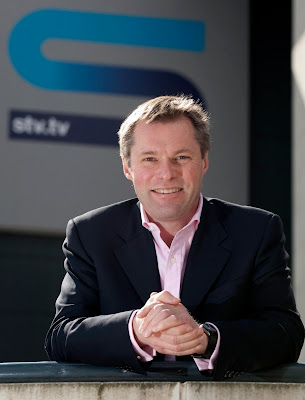 Rob Woodward (pictured above) was appointed to the STV Group plc Board as chief executive in 2007. Prior to this he was a senior advisor to LongAcre Partners, Europe’s leading independent mid-market corporate finance house focusing on the media and internet sectors. Until 2005 Rob served as commercial director of Channel 4 Television. He was an executive member of the Channel 4 Corporation Board and responsible for Channel 4’s commercial wellbeing. Rob developed and executed a commercial strategy for Channel 4, which has positioned the Corporation at the forefront of digital media, transforming the performance of Channel 4’s commercial businesses from heavily loss making to significant profitability.

Prior to joining Channel 4, Rob was a managing director at UBS Corporate Finance. Before this, he was the managing partner of Braxton UK, the strategy consulting practice of Deloitte. He also led Deloitte Consulting’s European TMT group. He has specialised in advising TMT companies on strategic and corporate finance issues for the past 20 years.

Ayrshire Chamber chief executive Martin Cheyne commented: “At the Chamber, we aim to develop and encourage the positive atmosphere of business growth in the region. We’ve had a fantastic turnout for previous speakers and encourage businesses to take the opportunity to learn from Rob’s wealth of experience.”

Posted by Ayrshire Scotland Business News at 4:28 pm No comments: