CLASS told in the William Hill Ayr Gold Cup at Ayr Racecourse recently, when the well gambled Our Jonathan won by a very cosy two lengths from favourite Eton Rifles. 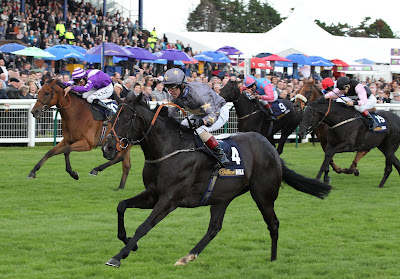 Ridden by Franny Norton, trained by Kevin Ryan and owned by Dr Marwan Koukash, who also owns Redford who won the race last year, the 11/1 shot was one of the easiest winners of the race with plenty in hand of the others.

Named after the owner’s brother-in-law’s son who died playing football at the age of 15, Our Jonathan was a really successful two year old a couple of years back, and returned to top form to stay on strongly and turn over the 6/1 favourite. 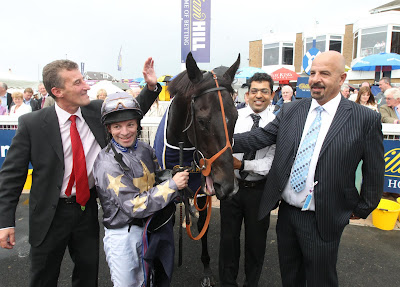 “I am so glad I came up this year, I missed last year’s race, so it is great to be up here. Great course, great people, great result. We left at six this morning to be here, and I don’t think we’ll go back till six o’clock tomorrow morning now.”

Trainer Kevin Ryan added: “In the last ten days he has really sparkled – it is difficult to be confident for the Ayr Gold Cup, but I felt he was just right today.”

And a jubilant Franny Norton commented: “I was destined to win this race – I was due to ride Redford last year and Bahamian Pirate a few years ago who both won, but today was the day for me.”

More than 10,000 people enjoyed the racing on Saturday, and despite a poor forecast the weather held up remarkably well.

The William Ayr Silver Cup also produced a remarkable result when the winner of last year’s Bronze Cup, Cheveton won at 12/1 under Dale Swift for trainer Richard Price. The seven year old won by half a length from Marvellous Value (20/1). Could it be a Gold Cup win beckoning for Cheveton next year?

Other highlights during the week included a superb performance from Poet, trained by Clive Cox and ridden by Adam Kirby to win the williamhill.com Doonside Cup at odds of 5/4 fav. On Saturday and earlier the same afternoon Roger Sez (14/1) annihilated the field in the Laundry Cottage Stud Firth of Clyde Stakes.

And although he didn’t win the Gold Cup this time round, David Nicholls did land a trophy with the williamhill.com Ayrshire Handicap going the way of Don’t Call Me ridden by his son Adrian and returned at 12/1.

Thursday’s feature race, the williamhill.com Handicap for ther Kilkerran Cup was won by Alistair Whillans Scrapper Smith in the hands of Julie Burke, while the BAM Properties Harry Rosebery Stakes for the South Ayrshire Cup on Friday went the way of Caledonia Lady (5/4 fav) ridden by Paul Hanagan for trainer Jo Hughes.

Posted by Ayrshire Scotland Business News at 1:14 pm No comments:

THOUSANDS of people headed to Ayr Racecourse recently for the annual three-day extravaganza that is the William Hill Ayr Gold Cup Festival.

And despite some heavy showers on the middle day – William Hill Ladies Day – the weather in the main held up despite a dreadful forecast, and the Festival was voted a great success by the public and racing industry.

The event attracts many visitors to the area, and one such woman was luckier than most. Marketing consultant Debbie Grogan from Sheffield is a keen racegoer, and attended Champagne GH Mumm Ladies Night in August when she was awarded a Bronze Coin and a place in the final of Ladies Day.

On Friday she duly lined up with the other 24 finalists in the Ayrshire Suite, and from the tombola drum drew Coolminx – the subsequent winner of the William Hill Ayr Bronze Cup.

Debbie had to endure a photo-finish as Coolminx crossed the line along with stablemate Jeannie Galloway, but in the end she was overjoyed to win. 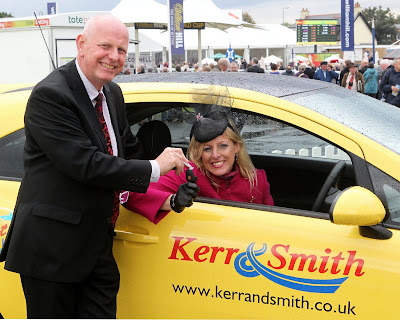 A delighted Debbie was presented with the keys to the car by Jim Smith of Kerr & Smith, principal sponsors of the Ladies Day competition, and she said: “I am absolutely gobsmacked – never in my wildest dreams did I think I’d win.

“I go racing with my husband all over Britain, and Ayr has always been special to me – now I’ll never ever forget the track and this meeting. I’d like to thank Jim Smith and his company for sponsoring the event. We’ve had a fabulous time, and even if I hadn’t won the car I was still enjoying myself despite the weather.”

Runner-up prize of a fabulous trip to Dubai from Stewart Travel was won by Gillian Wilson from Ayr, who will soon be jetting off to enjoy an unexpected sunshine holiday. Third prize of a piece of jewellery from Alex Cairncross went to Stewarton lady Alana Rafferty.

There was also an added bonus for Jason Hart of Ballater and Michael Goldie of Ayr, who each picked up £300 of Slaters vouchers from Jack Blades, Manager of Slaters in Ayr after being voted the Best Dressed Men on the day.

First Minister Alex Salmond attended on Saturday, and mingled with the crowd throughout the day and took time out to chat to many of the racegoers. The three-day meeting attracted slightly fewer to the course than in previous years – around 19,000 took in the action - but the feedback was very positive.

Lindsey Smith, Sales and Marketing Manager of Ayr Racecourse said: “I have never heard so many positive comments at any meeting. We had a fantastic three days, and, although the weather wasn’t kind to us on Friday, nobody let it dampen their spirits.

“We entertained 200 William Hill employees from all over the UK for their long service awards, and they were all very impressed with everything.”

Posted by Ayrshire Scotland Business News at 12:12 am No comments: