RENTAL income from wind farm developments increased by between 10 and 15 per cent throughout 2011, according to research by CKD Galbraith, the leading independent property consultancy with 12 offices throughout Scotland. 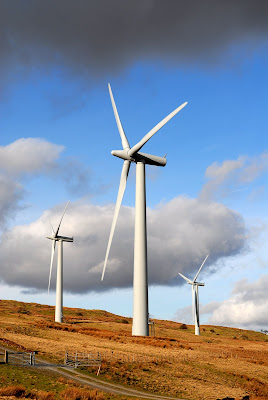 Along with rental increases, CKD Galbraith noted that other financial agreements, such as payments for use of minerals, frequency of rent reviews and option payments, also increased as developers acknowledged the value of land to renewable energy projects.

The Energy research department at CKD Galbraith ascertained that 13 wind farms became operational in Scotland during 2011, providing an additional installed capacity of 382 megawatts (MW). This, added to existing installed capacity, means that Scotland has 2,784 MW of wind power potential.

Ayrshire and Lanarkshire saw the biggest increases in installed capacity, with 176MW and 141MW added respectively. These were primarily due to large developments coming on line, such as the Arecleoch Wind Farm in Ayrshire and the Clyde South Wind Farm in Lanarkshire, rather than several smaller projects.

The Highlands retain the highest output – around 500MW installed capacity, with a further 630 MW approved or under construction and another 1,004 MW submitted to planners for approval. The Highland region is favoured by developers for its space, reliable wind resource, low population density and a new grid connection on the way.

However, developers continued to face challenges in completing projects – 17 wind farms (309 MW) were refused planning permission throughout 2011, demonstrating the stringent planning requirements that developments must meet prior to approval.

Wind power enables landowners to generate income from other sources, helping to diversify away from more traditional land use, generating funds to reinvest and creating positive effects in local economies, a major benefit in rural areas especially. Another advantage is the developer’s contribution to local communities, often in the form of annual payments to community councils.

• Negotiation periods are becoming shorter in many cases as legal advisers gain experience in the sector;

• Landowners are more focused on the tax implications of deals agreed – primarily because returns are greater than previously, with income payable over long terms, making tax planning essential;

• Habitat management agreements and compensatory woodland planting are increasingly a condition of planning consent, requiring developers to improve the environment elsewhere on properties, or plant woodlands if forestry is felled to accommodate wind farm.

• Developers are reverting more to landlords to extend wind farms because (a) as the public adjusts to visual impact, there are fewer objections to additional turbines (b) with infrastructure already in place, development is more straightforward on an existing site.

Aside from larger, developer-led projects, landowners are increasingly leading medium-scale projects themselves, utilising assets either individually or alongside a developer or investor as a joint venture. Where landowners bring land and can raise capital, developers can add knowledge, expertise and further funding. Owners taking this route benefit greatly from the advice of surveyors and other professionals to ensure asset values are protected, and in most cases, all fees are met by the developer.

In small-scale renewable energy projects, attention has focused on changes to the Feed in Tariff scheme relating to solar PV payments. However, landowners should note that rates for small-scale wind are also likely to change in the UK Government’s review, taking place in 2013, though on a lesser scale than for solar.

Developers of single-turbine projects are offering landowners rentals of between 8 and 15 per cent of gross income. These are often fixed rents only, with no staged increases or rent reviews. Single-turbine projects remain subject to planning delays as councils decide how to measure cumulative impact on the local countryside.

Mike Reid, a Partner at CKD Galbraith at Cupar in Fife, commented: “Wind farms are not only a highly effective means of generating renewable energy but they also provide additional investment to create and preserve employment and economic activity in rural areas. We have developed a significant body of data and regularly share this with clients.”

Fiona Samson, a surveyor at the Elgin office of CKD Galbraith and a member of the Firm’s Energy team, added: “There is movement at every level of the wind-farm sector in Scotland. The outlook for 2012 is very positive.”

CKD Galbraith is the leading independent property consultancy, with 12 offices throughout Scotland. The Firm provides a full range of property consulting services across the commercial, residential, rural and energy sectors. Drawing on a century of experience in land and property management, CKD Galbraith is progressive and dynamic, investing in its 200 people and technology. The Firm provides a personal service, listening to clients and delivering advice to suit their particular opportunities and circumstances. Its associate, CKD Kennedy Macpherson, is based in London.