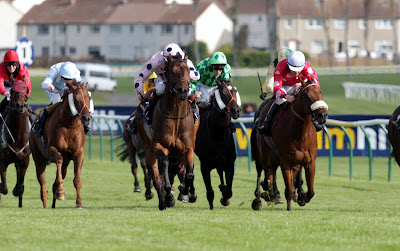 [Pictured: Captain Ramius (centre) storms clear to win the William Hill Ayr Gold Cup.]
With a crowd of more than 11,000 watching, the six year old stormed clear inside the final furlong under Irish jockey Pat Smullen and won cosily by two and half lengths from the 2008 winner Regal Parade.
Captain Ramius had been gambled from 33/1 in the morning down to 16/1 and landed the near £75,000 first prize with ease, giving his trainer his third winner in the race over the past six years.
The William Ayr Silver Cup went the way of Mass Rally (16/1), trained by Michael Dods and ridden by Paul Mulrennan, while the Bronze Cup stayed in Scotland courtesy of the Jim Goldie trained, Graham Lee ridden Jack Dexter, the 5/1 favourite.
Other notable winners on Saturday included the 8/13 chance Opera Gal, ridden by Jim Crowley for Andrew Balding in the Doonside Cup, Melody of Love (7/2) for Paul Mulrennan and Ann Duffield in the Laundry Cottage Stud Firth of Clyde Stakes.
Friday’s highlight was the Shadwell Stud Harry Rosebery Stakes which went the way of Garswood (5/1), ridden by Tony Hamilton and trained by Richard Fahey. This was a particularly impressive winner and should go on to better things.
The main supporting race was the William Hill Supporting Dumfries House Ayrshire Handicap won by Osteopathic Remedy (9/1), a first ever winner for jockey Connor Nicholl who was presented with his prize by the Duke and Duchess of Rothesay.
Ayr’s next meeting is the Autumn Raceday on Tuesday, the first race due off at 2.10 pm. For more information on racing at Ayr call 01292 264179 or go online at www.ayr-racecourse.co.uk
For further information please contact Iain Ferguson on 01292-294972 or 07795-565691.
Ayr Racecourse and the associated Western House Hotel are Founder Members of the Elite Ayrshire Business Circle.