An historic accord that paves the way for a referendum on an independent Scotland was signed in Edinburgh today, after First Minister Alex Salmond reached an agreement with the Prime Minister David Cameron that will confirm the Scottish Parliament’s power to hold a vote that will be respected fully by both governments.

[Click on arrow above to view video.]
The “Edinburgh Agreement”, ratified by Mr Salmond and Mr Cameron at a ceremony in St Andrew’s House in the heart of Scotland’s capital, will see Scottish and UK governments work together to ensure that Holyrood is able to deliver a referendum that meets the highest standards of fairness, transparency and propriety. 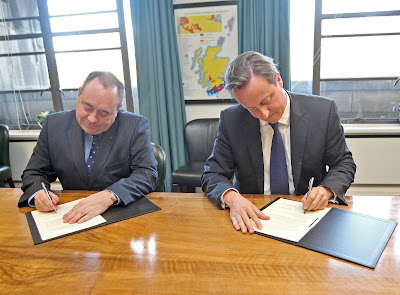 The agreement will see a Section 30 order laid in the Scottish Parliament and at Westminster to confirm Holyrood has the power necessary for a single question referendum, ensuring that the 2014 vote will be designed and run by the people of Scotland.

After the order has been agreed, the Scottish Government will bring forward legislation to Parliament to enable the referendum to be run. This will set out the proposed date, franchise, the wording of the question, rules on campaign finance and other rules governing the conduct of the campaign. 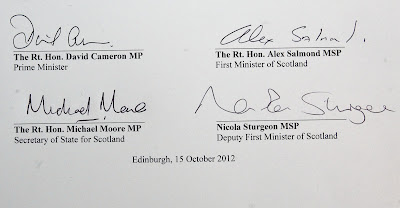 A final decision on these aspects will be taken by the Scottish Parliament, taking full account of the responses to the Scottish Government’s referendum consultation. Speaking after the signing ceremony, First Minister Alex Salmond said: “The Edinburgh Agreement, signed by the Scottish and UK governments today, marks a significant step in Scotland’s Home Rule journey. Importantly, it will ensure that the biggest decision the people of our country will make for many generations is made here in Scotland for the benefit of all of those that live and work here.

‪“This will be a referendum designed and delivered by the Scottish Parliament.  Today’s accord marks agreement on the process and respect for the outcome, from both sides.  In my view, it paves the way for a new partnership in these islands.

‪“The Scottish Government has an ambitious vision for Scotland: a prosperous and successful European country, reflecting Scottish values of fairness and opportunity, promoting equality and social cohesion.  A Scotland with a new place in the world - as an independent nation.

‪“Today’s historic signing of the Edinburgh Agreement marks the start of the campaign to fulfil that ambition. It will be a campaign during which we will present our positive, ambitious vision for a flourishing, fairer, progressive, independent Scotland - a vision I am confident will win the argument and deliver a Yes vote in Autumn 2014."