Scotland’s relationship with India going from strength to strength

Scotland’s relationship with India is going from ‘strength to strength’ and delivering tangible results for both countries, the Culture and External Affairs Secretary has said.

Fiona Hyslop has spent the past week in India – one of the world’s fastest-growing economies – to promote Scotland as a creative nation and internationally competitive and innovative location.

The Cabinet Secretary travelled to New Delhi and Jodhpur where she undertook a total of 33 engagements aimed at strengthening economic, cultural and diplomatic ties. 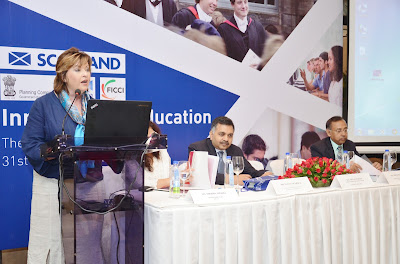 During the visit, Ms Hyslop:
* Inaugurated the new Indian offices of Scottish energy firm Wood Group.
* Announced four groundbreaking collaboration projects between leading education institutions in Scotland and India.
* Gifted to the Indian people 3D animations and models from a Scottish-led digital preservation project (Scottish Ten) of the centuries-old Rani ki Vav Step Well in Gujarat.
* Announced a partnership between two globally-renowned music festivals, Celtic Connections and Jodhpur RIFF.
* Attended three performances by Scottish artists and a Scottish Opera workshop in an Indian school.
* Visited a rural village in Rajasthan to learn about the importance of access to clean water.

The Cabinet Secretary said: “Scotland and India already share very strong ties, and our relationship has gone from strength to strength during my visit. I have met with business, education and cultural leaders to promote Scotland’s strengths as a nation rich in culture, creativity and heritage, and as an incredible place to visit, invest and do business.

“India is one of the world’s fastest expanding economies, and is an important investor in Scotland, providing approximately 5,000 Scottish jobs. Our nation’s strengths in technological innovation and cutting edge research and development mean that Scottish companies are ideally placed to take advantage of this growing market.

“Cultural collaborations are helping to forge new alliances between our two countries, and I am excited about some of the new partnerships and agreements that result from this visit.”