Cinderella pantomime set to re-open the Gaiety Theatre in Ayr

A significant step forward in Ayr Gaiety Partnership’s (AGP) plan to develop the Gaiety Theatre as a new hub for arts and culture in South Ayrshire has been announced. 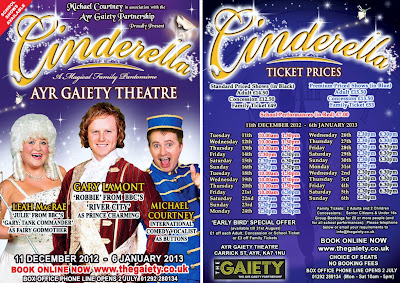 This first ever pantomime at the newly re-opened Ayr Gaiety Theatre over Christmas 2012 and New Year 2013 promises to be a stunning pantomime produced by one of the UK’s leading theatre companies headed by Michael Courtney who was nominated the UK ‘Producer Of The Year’ in 2008.

The pantomime will star Gary Lamont as Prince Charming. Gary, nominated in the Outstanding Contribution to Entertainment category at the Great Scots Awards last year in London, is known to millions for his role in BBC Scotland's “River City” as hairdresser Robbie Fraser, one of the show’s most lovable characters.

Starring with Gary will be Leah MacRae in the magical role of Fairy Godmother. Leah is a familiar face in Scottish Television, best known for her role as Julie in the Comedy Unit’s Gary: Tank Commander. Other TV includes Rab C Nesbitt (BBC2), Grownups (BBC3) and Stake Out (CBBC).

Buttons is played by Michael Courtney, who has graced the Ayr Gaiety Theatre many times before in a number of UK touring shows, always performing to sell-out audiences and known for his outstanding voice and hilarious comedy.

A spellbinding pantomime full of music, magic and mayhem, special effects, breathtaking sets, loads of laughs and lavish costumes, Cinderella will be the perfect Christmas treat for all the family and one of the most sensational and magical pantomimes to come to the Ayr Gaiety Theatre.

Leah MacRae said: “I am delighted to be part of the first production in the newly restored Gaiety Theatre. The people of Ayrshire are in for a real treat with a fantastic panto, produced by a brilliant production company, with a cracking cast. Bring It On!!!”

Leader of South Ayrshire Council Bill McIntosh added: “This is a landmark moment for arts and culture in South Ayrshire and the result of productive partnership working between the Council, AGP and the University of the West of Scotland.

We are delighted that the Gaiety is reopening and are keen to play our part in creating the hub for the development of arts and cultural opportunities not just for South Ayrshire, but throughout south-west Scotland. We are keen to ensure that the Gaiety re-establishes itself as a sustainable and quality venue that will bring significant cultural and economic benefits to the area and our residents.”

AGP chair Ian Welsh, welcomed the news commenting: “This is excellent news – not just for the Partnership, Council and university – but for everyone who has helped ensure that the Gaiety reopens.

“Government funding is helping us to complete the outstanding works required and we are developing plans for the programming of the performance venue as well as the main auditorium to complement our developing arts and culture programme.

“The Scottish Government remains committed to work with us and other national agencies, to meet the outstanding capital funding gap and we are currently finalising applications to Creative Scotland and other agencies.

“We will now be engaging with South Ayrshire Council and UWS around events and business planning and other joint-working opportunities to develop a full, purposeful and integrated marketing strategy for arts and culture venues in South Ayrshire.”

There will be a run of performances at The Ayr Gaiety from Tuesday 11 December 2012 through to Sunday 6 January 2013, with some performances especially for school parties at special rates.

Phone bookings can be made from Monday 2 July by calling 01292 280134 and online booking is available now with no booking fee required.

For further full details and to book online, visit www.thegaiety.co.uk
South Ayrshire Council is a Founder Member of the Elite Ayrshire Business Circle.

﻿
Posted by Ayrshire Scotland Business News at 7:45 pm No comments: