Three quarters of participating Scottish employers view Modern Apprenticeships (MAs) as being important to their business, according to a new survey. 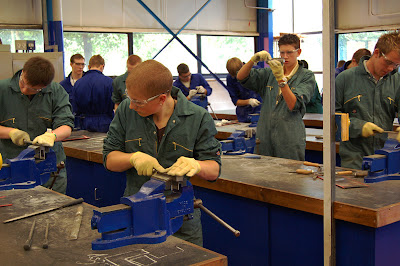 Scottish employers’ views of Modern Apprenticeships 2013 also show very high levels of satisfaction with MAs. The majority of employers also plan to continue offering opportunities in the future, and in many cases increase them.
Key findings include:

• 96 per cent of employers reported that MA completers were better able to do their jobs
• Employers surveyed reported high levels of satisfaction with the relevance (85 per cent) and quality (83 per cent) of the training provided
• 75 per cent of employers viewed MAs as either important or vital to their business
• Most employers (83 per cent) who currently offer MAs plan to do so in future.
• Of these employers, 69 per cent expect to offer the same number of MAs in future and 19 per cent expect to increase the number of MAs offered.
Minister for Youth Employment Angela Constance said: “In a survey published in January, 92 per cent of Modern Apprentices told us they were still in employment six months later after finishing their MA. Today’s survey further underlines the importance of MAs to the Scottish economy. As well as the high levels of satisfaction reported, I am very pleased to note that many employers plan to continue their programmes and in many cases increase them.
“We have committed to at least 25,000 Modern Apprenticeship opportunities in every year of this Parliament as part of a wide range of activity aimed at supporting young people into employment. Being an MA not only ensures young people are employed, but also provides individuals with new skills, experiences and a recognised qualification.
“I hope that these findings will encourage more employers to consider taking on MAs.  Throughout 2013 I will be asking them to make young people their business and this survey clearly outlines the benefits that an MA could have for Scottish companies.”
Graeme Waddell, Board Member of Skills Development Scotland (SDS) and Board Chair of the Scottish Manufacturing Advisory Service (SMAS) added: “This survey clearly illustrates the positive contribution and business benefits that the Modern Apprenticeship programme brings to employers all over Scotland. It is clear that the programme is valued by employers and meets the demands of industry.
“It is particularly pleasing to see that so many employers are committed to the programme, which delivers motivated and committed individuals with the skills and competencies to meet business needs.”
Mick Ord, Managing Director of BAE Systems Maritime – Naval Ships, who started his career as an apprentice 17 years ago, also said: “Our Modern Apprenticeship programme creates a pipeline of exceptionally talented young engineers who are critical to the long term future of our business. We are committed to investing in skills and developing talent in the workplace which will enable us to keep growing, keep innovating and keep competing with the very best in the world both now and in the future.
“We are proud to offer a programme which allows individuals to gain experiences and qualifications that can act as a great foundation for a whole range of successful careers.”

As a member of the team at JB Management and board member of the Scottish Training Federation, I am delighted to read the positive comments on the Modern Apprenticeship programme in the article above. JB Management is one of the providers working with Skills Development Scotland to deliver qualifications to individuals in order to develop or further develop their careers. I strongly believe the Modern Apprenticeship programme in Scotland is something to be proud of, encapsulates the key strengths of work based learning and will contribute to the sustainability of Scotland's economy.