Transformation will leave Ayr’s ‘pink buildings’ pretty as a picture

Work to transform the iconic ‘pink buildings’, which sit at the gateway to Ayr town centre, is set to get underway following the successful conclusion of discussions with the property owners and the appointment of contractors to complete the works.
The works will be completed as part of the £2.5 million Ayr Townscape Heritage Initiative (THI) – funded by South Ayrshire Council, the Heritage Lottery Fund (HLF), Historic Scotland and owner contributions. The level of owner contributions vary according to the specification of the works required. 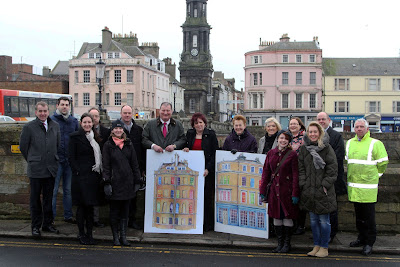 [Pictured: Ayr Councillors Kirsty Darwent, Allan Dorans, Mary Kilpatrick, Rita Miller and Corri Wilson joined owners of homes and businesses within the pink buildings, contractors and officers working on the project to celebrate the conclusion of discussions and the appointment of the contractors to carry out the much-anticipated works.]
Ayr THI will be delivered through a sympathetic conservation and refurbishment programme that ensures the special historical and architectural character of the buildings is properly maintained.
The properties included in the THI are 1-3, 2-6 and 6A-10 New Bridge Street in Ayr and comprise a total of 12 flats and five shop premises. Planned improvements include:

• Removal of the existing paintwork, which is cracked and peeling in many places.
• Repointing and stonework repairs to improve the external condition of the masonry and to prevent water penetration into the buildings.
• Roof repairs and replacement, where required.
• Renewal of downpipes and gutters to improve rainwater disposal.
• Lime rendering to protect the walls of the buildings.
• Limited structural repairs.
• Window repairs and replacement, where required.
ARPL Architects and contractors CBC will carry out all works using traditional methods and materials and in line with best conservation practice to help preserve the history of the buildings and town, while ensuring they can enjoy a sustainable future.