Alan King was the proudest man at Ayr Racecourse on Saturday when Godsmejudge (pictured below) crossed the line a four length winner of the Coral Scottish Grand National. 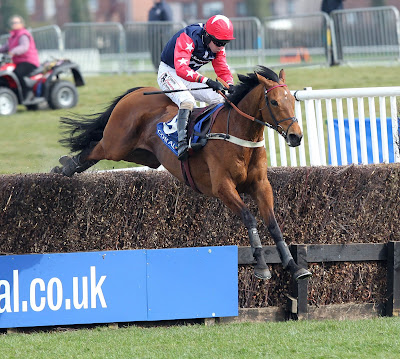 The Wiltshire based, Bellshill born trainer worked as an assistant at Cree Lodge Stables just yards from the Ayr track in the late 1980s, and said he felt as if he was ‘coming home’ when he went up to receive the magnificent trophy.
Jockey Wayne Hutchison had his horse in from a long way out and oozed confidence as he turned into the home straight. 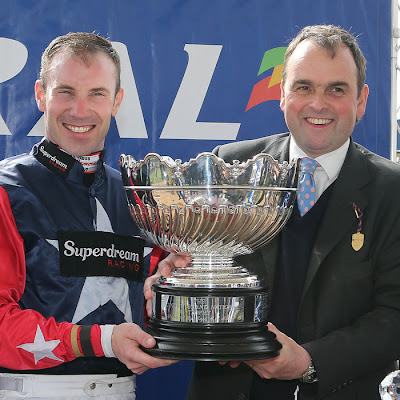 [Pictured: Coral Scottish Grand National 2013 winning jockey and trainer Wayne Hutchison and Alan King.]
The smiling jockey said: “I knew it was in the bag when we turned in and I just kept concentrating. It was a great feeling. Superb.”
And Alan King added: “I love this meeting. I have been lucky enough to win a lot of big races, Queen Mothers and the Champion Hurdle and this is right up there with those.”
All the hype before the race surrounded the Aintree winner Aurora’s Encore and jockey Ryan Mania but the horse was pulled up five out and Mania said afterwards: “Today everything went wrong. He was almost brought down at the second fence and after that he was always looking after himself.”
A record crowd of 18,300 packed the stands and sold up signs went up on both the Club Enclosure and in Hospitality.
The main supporting race, the QTS Scottish Champion Hurdle was won by Court Minstrel, trained in the Vale of Glamorgan by Evan Williams and ridden by conditional jockey Adam Wedge.
And there was a bumper near £40,000 prize for Netminder’s Borders trainer Sandy Thomson and jockey Peter Buchanan when they landed the Weatherbys Hamilton Insurance Novices Handicap Chase.
Friday’s highlight was the Hillhouse Quarry Handicap Chase which was won by Bocciani, ridden by Tom Scudamore . The 6/1 chance won by five lengths from Mr Moonshine and Ryan Mania.
www.ayr-racecourse.co.uk
For further information please contact Iain Ferguson on 01292 294972 or 07795 565691.
Ayr Racecourse and the associated Western House Hotel are Founder Members of the Elite Ayrshire Business Circle.