Kilmarnock-based Klin Group is to progress the redevelopment of the site of the former Diageo bottling plant in Kilmarnock.
Diageo and Klin have signed an exclusivity agreement over the ownership and intended development of the 23-acre town centre site at Hill Street, adjoining land gifted by Diageo to Kilmarnock College. 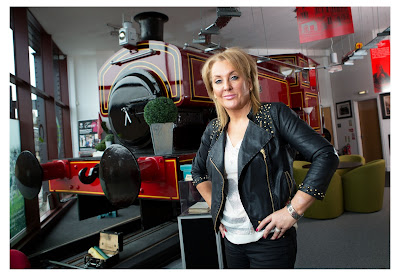 [Pictured: Klin Group chief executive Marie Macklin in front of a locomotive that was built in the 1940s for the Second World War.  It was bought by Klin, refurbished and sits in Klin’s reception as testament to Kilarnock’s industrial past.]
Klin Group chief executive Marie Macklin said:  “As a local company, we are thrilled to have this opportunity to create something special for Kilmarnock.  The exclusivity agreement with Diageo enables us to press ahead with local consultations, to explore the feasibility and the detail of what we envisage for the site.
“We are confident that what we are proposing is deliverable, though we still have a lot of challenges, and a lot of hard work to do in engaging both public and private sector interests in creating a sustainable development that the community can be proud of.
“Our aim is a dynamic new quarter for Kilmarnock town centre, based around education, health, community sports and culture, including an arena that would provide a year-round, all weather venue for sporting, conferencing and entertainment events. The hub would be focused on facilities and premises for enterprise, entrepreneurs and start-up businesses, driving a new economy for Kilmarnock and East Ayrshire, but serving a much wider area with facilities that would be unique in Scotland.
“Everything we have in mind would link into the work of Kilmarnock College, in particular, and local schools in general and, hopefully, would inspire and support local sports and cultural groups.”
Klin Group, established in 1988, is a privately owned Property Investment and Development Company based in Kilmarnock. The company’s focuses on regeneration developments in Scotland and in property investments overseas.
Klin brought the first Morrison supermarket to Scotland in 2003. In January, 2008, First Minister, Alex Salmond officially opened the first phase of a Kilmarnock redevelopment comprising 62-serviced apartments, retail, and commercial premises and a dedicated railway heritage centre within the grade B listed building of the former Barclay railway engineering works.
The second phase of this initiative, completed this year, was the restoration of a former Victorian Opera House in John Finnie Street, derelict since 1990.  Following ten years of resolving complex ownership and development issues, the new building, with its original façade restored, provides offices for over 300 East Ayrshire Council employees.
Klin was one of the first private sector investors in the regeneration of the Tollcross area of Glasgow. The company completed several brownfield housing developments that led the way for further third party investment. Their work included ‘Kings Way’ (opposite Tollcross International Aquatics Centre swimming pool where the 2014 Commonwealth Games are being held) and sites at Culrain Street, Wellshot Road and Tollcross Road.
www.klinhomes.co.uk