Leading personal injury compensation claim specialists Accidentclaims.com (part of Ayr-based law firm Frazer Coogans Solicitors) have succeeded in winning compensation for an Ayrshire man wrongly accused of being partly to blame for his own injuries sustained in a collision with a car whilst travelling on his bicycle. 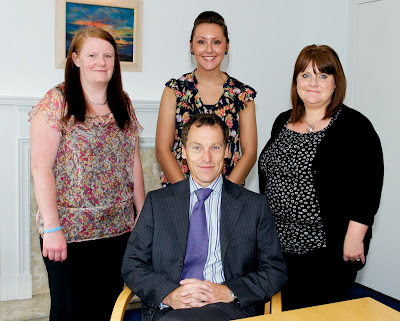 [Pictured: the AccidentClaims.com team at Frazer Coogans Solicitors. From left to right behind head of department Ross Slater are: Cheryl Phillips, Stacey Carey and Sandra Stewart.]

Dave Calderwood is a 63 year old (61 at the time of the accident) self-employed sales service manager from Kilmarnock, and a very keen cyclist.
On 30 September 2010, he was making his way south on Grassyards Road in Kilmarnock in the clearly marked cycle lane when a car coming from the opposite direction turned right into Lindsay Drive, cutting across his path. As it was slightly downhill, he was travelling at approximately 20 mph.
Despite braking as hard as he could, he was unable to avoid the road traffic collision, and hit the car. He was thrown from his bike, sustaining various soft tissue injuries, and having his bicycle damaged beyond repair.
Dave asked Accidentclaims.com to help him with his accident injury compensation claim. Stacey Carey intimated a claim to the third party insurers.  Despite admitting primary liability for the road traffic accident, the insurers attempted to blame the cyclist for failing to wear reflective clothing in broad daylight in a cycle lane! Dave was forced to raise court action to clear his name.
With the threat of a full court hearing looming, the solicitors for the driver quickly admitted full liability, and valuation negotiations were able to start properly.  After a number of offers were rejected, the defender was persuaded to make an offer of £3,050, including the full replacement value of the bike.
“I am very pleased that I am no longer being blamed for this accident,” Dave said. “Accidentclaims.com remained firm in their advice about the fault for my bicycle accident.”