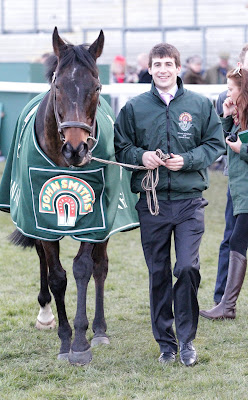 Ryan, who hopes to ride national hero Aurora’s Encore (pictured above) in the Scottish version on Saturday, was passed fit by his GP and then told by the British Horse Racing Authority he could resume on Friday.
Aurora’s Encore will attempt to become the first horse since Red Rum in 1974 to complete the Aintree – Ayr double.
There are eight races each day and a total of £537,000 in prize money on offer with all the leading jockeys and trainers in attendance.
AP McCoy, Ruby Walsh, Barry Geraghty, Richard Johnson and Jason Maguire are among the jockeys with mounts both days and trainers Paul Nicholls, Nicky Henderson, Alan King and David Pipe will be in attendance.
But the question on everyone’s lips is will Aurora’s Encore and Ryan Mania do the double. Race sponsors Coral have the Sue Smith trained horse at odds of 10/1 to do so.
Other leading contenders include Rival D’Estruval, carrying Raymond Anderson Green’s colours successful in 2010 and 2012 with Merigo, the Alan King trained Godsmejudge and the JP McManus owned Wyck Hill.
Lucinda Russell could be represented by course specialist Nuts N Bolts and the Irish could be represented by the Gordon Elliot trained Chicago Grey.
Main supporting race on Saturday is the QTS Scottish Champion Hurdle which has £60,000 in prize money and last year’s winner Raya Star, trained by Alan King, is likely to defend his crown.
Other races include the Arcadia Consulting William Dickie & Mary Robertson Future Champion Chase, the Scotty Brand Handicap Chase, the Weatherbys Hamilton Insurance Novices Handicap Chase and the DBS Spring Sales Bumper.
Friday’s eight race card is headed by the Hillhouse Quarry Handicap Chase with £25,000 on offer and won last year by the Paul Nicholls trained, Ruby Walsh ridden The Knoxs.
Friday’s card ends with a competitive National Hunt Flat Race which again will attract some big name trainers and jockeys.
Advance ticket sales for the meeting are selling well and a crowd of more than 17,000 is expected on Saturday. For more details on racing at Ayr call 01292 264179 or go online at www.ayr-racecourse.co.uk
For further information please contact Iain Ferguson on 01292 294972 or 07795 565691.
Ayr Racecourse and the associated Western House Hotel are Founder Members of the Elite Ayrshire Business Circle.