Pupils from Girvan Academy took to the water last week in their newly-constructed skiff, the Creag Easlasaid, to celebrate the official opening of the £500,000 Girvan Harbour Pontoons in the South Ayrshire town. 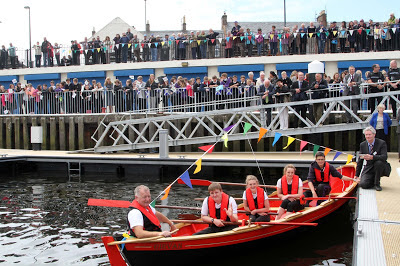 The Creag Easlasaid – Ailsa Craig in Gaelic – was one of the first vessels to berth as the pontoons – 35 modern berths for a range of vessels with electricity and water supplies, secure quayside access and CCTV – were officially opened by Councillor John McDowall, who unveiled a cairn that will now be a permanent feature at the harbour. 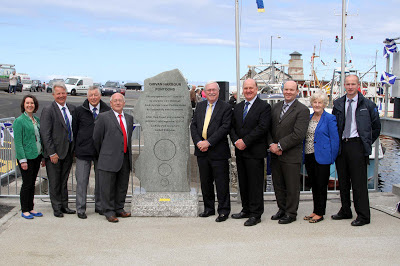 And the Girvan Academy pupils took advantage of their prime position on the new pontoons to carry-out an official naming ceremony for their skiff, which they constructed– with the assistance of community volunteers – as part of the Scottish Coastal Rowing Project.

Funded by the Sail West project through European Union’s INTERREG IVA Programme for Ireland, Northern Ireland and Scotland and by Scottish Enterprise and South Ayrshire Council, Girvan Harbour Pontoons provide a great boost to the facilities on offer to sailors in Ayrshire. 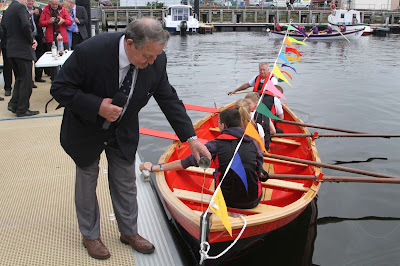 Councillor John McDowall, Depute Leader of South Ayrshire Council – and a local Councillor for Girvan and South Carrick – said: “We have a terrific marine resource here in Girvan and these new pontoons will ensure it is used to its full potential whether for fishing, local business, tourism or leisure. We only have to look around today to see the excitement created by this development to see the difference it has made already and with aspirations to do even more, this is only the start of the journey – or should that be voyage!

“I’m delighted we now have a modern harbour area that can be enjoyed by many more sailors and I hope this encourages them to stop off and spend some time with us both here in Girvan and across Ayrshire.” 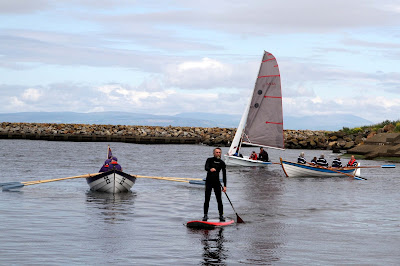 Michael Wright from Scottish Enterprise added: “Our focus is to help grow the Scottish economy by investing in projects that will create employment and enhance Scotland's reputation as an attractive place to live, work and visit. I have no doubt these new facilities in Girvan – which complement similar projects along the coast – will make Girvan an even more attractive destination for sailors.”

The Sail West project is a collaborative initiative led by Donegal County Council on behalf of 20 funding partners, and comprises a programme of some €8 million investment in an agreed series of infrastructure improvements and product development, including Girvan Harbour Pontoons. It also includes a joint marketing campaign under the MalinWaters brand umbrella to promote marine tourism between the west of Scotland, Northern Ireland and the Republic of Ireland.

Garry Martin, Sail West Project Chairman, said: “Girvan Harbour Pontoons are a vital and strategic element of the overall Sail West project, enhancing the links between Scotland and Ireland and ensuring this part of the country is firmly on the nautical map. I’m very proud of what has been achieved and it’s great to see the pontoons are already very popular with sailors both from home and away. This site is sure to have a positive future.”

Commenting on the contribution of over 50% funding for the scheme from the European Union’s INTERREG IVA, Lorraine McCourt from the Special EU Programmes Body (SEPUB) said: “This initiative is a perfect example of how a wider EU-funded project such as Sailwest/ MalinWaters can have a very significant impact on the local community. Investing in tourism and the promotion of the area’s tourism potential is economically central to the sustainability of small communities and is crucial to ensure the sustainable use of local resources. This new facility will contribute to making Girvan a preferred stopping point for sailing tourists and a base from which they can then discover this area of Scotland.”

Moira Birtwistle, Chair of the Ayrshire and Arran Tourism Leadership Group, concluded: “Sailing and our coastal environment are key components of the tourist offer we have here in Ayrshire and we’re doing a huge amount of work to ensure the use of these assets is maximised both on land and off. Quality berthing locations are therefore vital as we want people to stop, get off and enjoy our fantastic area – rather than just sailing by. These new pontoons will help that become a reality – and that benefits us all.”

Mark McCrindle, a member of the Girvan Harbour Users Group said: “The change in Girvan Harbour is unbelievable. The investment in the new facilities is already making a difference to the harbour users and will continue to do so for many years. I am positive that many sailors will be attracted to visit the marina on a regular basis.” 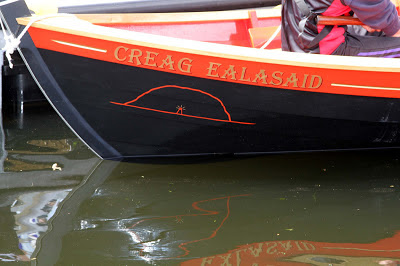 The Girvan Academy boat is a St Ayles skiff. More than 40 pupils and volunteers from the community (Bill Swiatek, Walter Willis and Les Austin) as well as teaching staff from the technical department, including a technical technician who is a boat builder to trade were involved in its construction. The skiff was constructed as part of the Scottish Coastal Rowing Project, which began in 2010 to encourage coastal rowing and racing around the Scottish coastline and lochs with the boats being built by the people who will be rowing them. The Creag Easlasaid  – Ailsa Craig in Gaelic – took a year to build and is finished in the Girvan Academy colours of black and red. She was named by Colin McKechnie, former Cox of the Girvan lifeboat.