The contract, which will be delivered over two years, will see SgurrEnergy, part of Wood Group, advise the  Guangdong Electric Power Design Institute (GEDI), one of China’s leading design institutions, on its landmark Zhuhai offshore wind farm project.  The company, along with offshore experts, Wood Group Kenny, will advise on areas such as wind farm layout, site selection and design, ocean hydrometeorology and will conduct an Environmental Impact Assessment. 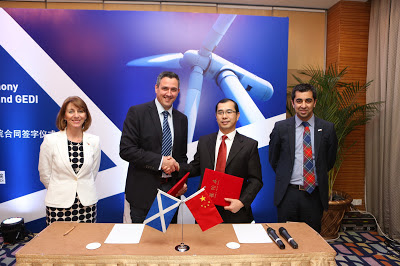 Witnessing the signing in Beijing today as part of his visit to strengthen trade and investment links with China, Humza Yousaf, Scottish Minister for External Affairs, has congratulated SgurrEnergy and highlighted its success as an example of how Scottish companies are providing both know-how and technology to support the growing Chinese renewables industry.

Speaking from the Chinese capital, Mr Yousaf said: “SgurrEnergy already has a very strong track record of providing renewables expertise, knowledge and technology to China as it works towards meeting its green energy targets, and this announcement is great news for both countries.

“It is another positive step forward in strengthening Sino-Scottish links and confirming Scotland’s reputation as a global leader in the development of renewable energy.”

This latest project builds on SgurrEnergy’s strong track record for the provision of consultancy on offshore wind development in China.  The company was involved in the Jiangsu offshore wind farm project and has worked alongside the main Chinese utility providers via the World Bank’s China Renewable Energy Scale-up Programme and EU Aid China.

Cathryn Chu from SgurrEnergy’s Beijing office, said: “SgurrEnergy has been involved in the Chinese offshore wind industry since 2007.  Our knowledge and experience gained in China, together with our advanced technical capability in offshore wind from Europe, has been key in the success of this partnership with GEDI.

“We are focused on delivering advice on best practice in offshore wind development, ensuring quality throughout the local capability scale-up and design phase.  We are excited to be involved in the Chinese offshore wind sector in Guangdong, after having previously worked in Shandong, Shanghai, Jiangsu, Zhejiang and Fujian provinces.”

Dr. Wang Hailong from GEDI, said:“GEDI is proud to be involved in this landmark project to develop the first offshore wind farm in Guangdong province.  The support of SgurrEnergy and Wood Group Kenny, with their extensive experience in offshore wind, combined with our local experience in typhoon and soft seabed issues, is helping GEDI to address the engineering and technical challenges involved in offshore wind development in the region.”

Anne MacColl, Chief Executive of Scottish Development International, is also in Beijing promoting Scotland’s trade and investment agenda.  She said: “Scotland has some of the best renewable energy resources in the world, which coupled with our strengths in innovation and the engineering excellence, developed over the past 40 years since North Sea oil and gas discoveries, have helped make us an internationally competitive global energy player.

“Scottish Development International has been working closely with the Scottish renewables industry to take a closer look at how to apply its innovation and experience to the Chinese market.