The Klin Group has announced an exciting three-year agreement to become the sponsor of the newly named Young Kilmarnock Club until the 2016/2017 season. 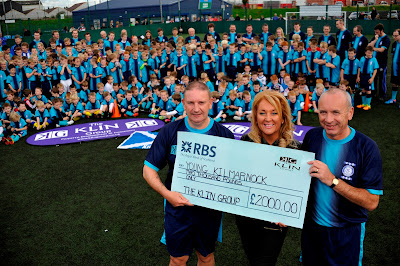 Marie Macklin, CEO of Kilmarnock-based Klin Group which specialises in property development and regeneration projects, met with members of the club during ‘Saturday morning football club’ as the new shirts were unveiled. Over 200 young club members attend per week.

Marie had originally committed to sponsorship for the 2013/2014 season, but after visiting Young Kilmarnock on Saturday to present the cheque, was so impressed that she has committed the Klin Group to a further two years sponsorship, up to and including the 2016/2017 season.

Marie Macklin, CEO of The Klin Group, said:  “We’re extremely proud to be the new sponsor of Young Kilmarnock. We believe in supporting home-grown talent and helping them realise their full potential, so this is a natural association for us.  The team does fantastic work in promoting football, exercise and teamwork and the kids thoroughly enjoy it. The youth of today is the future of Scottish Football, and we’re proud to have our name on the Young Kilmarnock shirts.”

Scott Geddes of Young Kilmarnock (YK) said: “We’re thrilled to have Klin on board as our major sponsor. We know they are passionate football fans who are committed to Young Kilmarnock. Young Kilmarnock is an independent organisation run by volunteers, with over 500 members aged between 4 and 16 years. We will continue to strive to increase our membership and membership benefits, promote Kilmarnock FC in our local community and maintain our position as one of the best junior supporters clubs in the country.

“Membership of the club is going from strength to strength, and, with this additional support, we’re confident of growing our numbers and creating even better activities for our young people. This is a real boost to the club. We’re also delighted that the club has reached the finals of West Sound’s ‘Cream of Ayrshire Awards’ in the Contribution in the Community category.”