Trailing in the footsteps of Robert the Bruce

The story of Robert the Bruce, his links and cultural impact in Carrick and South Ayrshire is to be brought to life through three picturesque trails in the local area.

The project, driven by the Association of South Ayrshire Community Councils (ASACC), was revealed at a special meeting in County Buildings, Ayr, opened by Provost Helen Moonie. 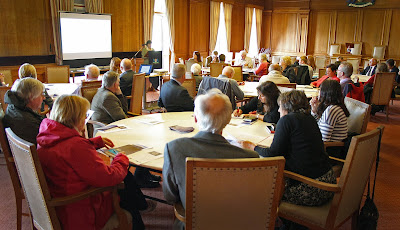 Provost Moonie welcomed delegates and said: “South Ayrshire and Carrick enjoy clear links to Robert the Bruce and I am passionate about the need to preserve and develop such an important heritage.

“The project is exciting – it will help us to add value and strength to this rich cultural, political and social heritage – linking past generations to the present – and on to generations yet to come.”

During the meeting, delegates, community representatives and potential funding partners were shown the results of extensive public consultations and the proposed trail paths, which will connect to the existing trail in Dumfries and Galloway.

The Bruce trail in Carrick and South Ayrshire will offer an extensive and joined-up network of paths that all link to the life and times of the King of the Scots and will cover three areas.

Supporting the trail, a number of road signs, plaques, information boards, cairns, marker stones and colour booklets are also planned, helping to set the scene and tell the tale of Bruce’s life and legacy in the area.

In addition, societies such as Carrick 800 and The Bruce Trust and The Friends of St John’s Tower have all expressed interest in re-enactments and events to help bring the monarch’s role in the area vividly to life.

Ideas for re-enactment events include the Parliamentary meeting at St John’s Tower, Ayr in 1315, Bruce's landing at Maidens and the meeting and marriage of Bruce’s parents: Robert Bruce and Marjorie of Carrick.

ASACC chairman Peter Mason said: “The Bruce Trail offers an ideal opportunity for our rich Bruce heritage to be formally recognised and marketed to those interested in history, both local and national.

“The trails are set in areas of outstanding natural beauty and are suited to walkers, ramblers and anyone who loves the great outdoors.

“As well as that, the paths make their way through many of the villages and towns that Bruce would have known, giving us the opportunity to develop hospitality, food and entertainment packages.”

His comments were echoed by Councillor Bill Grant, Portfolio Holder for Economic Development, Tourism and Leisure, who concluded: “Each and every community in South Ayrshire can trace a link to Bruce – from Ballantrae to Girvan, Turnberry to Ayr and Prestwick to Dundonald.

“This fantastic project, with all the possible spin-offs from it, can help deliver sustainable economic benefits to all of our communities and I am delighted by the lead role the Association of Community Councils has played in driving this.

“I look forward to its continued progress and completion with great anticipation.”

Closing remarks by Sandra Osborne MP also echoed the feeling of the meeting that this project demonstrated true community involvement and engagement and should be encouraged in its endeavours.

ASACC will now be developing the next stage of the project, with communities and interested groups being involved in design, wording and siting of trail interpretation boards, as well as possible events to mark the eventual opening.

Anyone wishing to get involved can contact Julia Whitaker at Ailsa Horizons on 01465 710628 or email: julia@ailsahorizons.co.uk