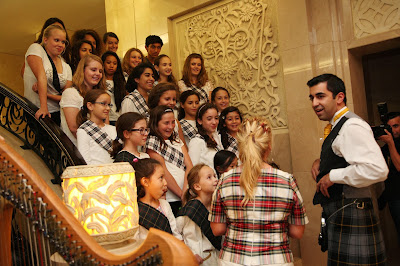 The event, which was organised by the British Council, marked the end of the Minister’s five-day visit to the Middle East to strengthen Scotland’s ties with the Gulf States and promote Scotland as a great place to visit and do business.

Guests tasted Scottish delicacies including smoked salmon, cheeses and natural mineral water against a backdrop of stunning photographs of Scotland at the reception, two weeks ahead of St Andrew’s Day.

The event was held at the spectacular Katara Cultural Village, where expats and local Qataris heard Scottish musicians including the Ross Ainslie and Jarlath Henderson Band who played to a packed house at the event. Guests were also able to try traditional ceilidh dancing and take part in an Orcadian Strip the Willow.

Minister for External Affairs, Humza Yousaf said: “Scotland Day was a fantastic opportunity to showcase our distinctive and diverse cultural landscape – from contemporary art and music to ceilidh dancing – and our wonderful food and drink.

“The day also marked the beginning of the international celebrations of St Andrew’s Day - we want everyone with a Scottish connection or a love of our country to join us and enjoy our traditional and contemporary culture and our fabulous food and produce.

"As we move towards 2014, a year that will see Scotland host the Ryder Cup, welcome the world to the Commonwealth Games and hold a referendum on Scotland’s independence, international interest in us is growing and we are keen to share our experience with our friends around the world.”

Martin Hope, Director of British Council Qatar said: “The first Scotland Day in Doha has been a massive success and was enjoyed immensely by a truly international audience.

“There’s a sizable Scottish community based in Qatar so it is great that both Qataris and Scots have the opportunity to share in and appreciate the diverse cultural offerings each country has to offer.

Mr Yousaf has visited the UAE and Qatar this week to build stronger ties between our governments, our businesses and our people across the Middle East region.