Scotland’s economy will benefit from independence over the uncertainty that would face the country within the UK, Finance Secretary John Swinney said today. 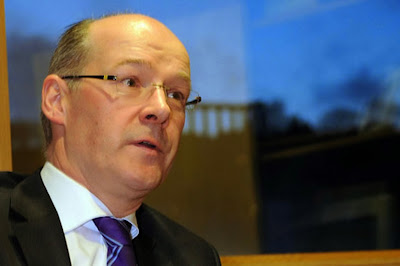 Speaking at the first annual Policy Scotland lecture at Glasgow University Mr Swinney (pictured above) said that Scotland’s economic performance has improved significantly since 1999, with Scotland reaching similar levels of productivity and earnings to the rest of the UK. He added that independence provides the opportunity to go further by creating more jobs.

Mr Swinney said that where Scotland’s Future addresses the challenges facing the Scottish Economy – the unequal and imbalanced structure of the UK is holding Scotland back.

The Finance Secretary said: “In Scotland’s Future people now have a vision of how independence will work and of what independence can offer.

“Scotland’s Future identifies the challenges Scotland face if our economy is to compete with the most dynamic economies in the world and if we are to increase levels of equality and participation at home.

“But where Scotland’s Future shows how the tools of independence can be used to meet those challenges, those opposed to independence have yet to say how remaining in a state as economically imbalanced as the UK can benefit Scotland.”

In his speech Mr Swinney highlighted the success already delivered with devolution and the benefits independence can bring: “With the limited powers of devolution, we have already seen an improved performance across a range of key economic indicators, both in absolute terms and relative to the rest of the UK.

“There is therefore good evidence that taking decisions in Scotland works.

“Through the transfer of additional powers, future Scottish governments could create a genuinely appropriate set of complementary policies - whether in relation to taxation, innovation, labour market regulation or industrial policy.

“We can create prosperity through a genuine social partnership between business, the public sector, trade unions, the third sector and universities, and distribute that wealth more fairly and more equally than it is at present.

“A country of Scotland’s size is well placed to build consensus in the key strategic areas and deliver policy which best meets the needs of the Scottish economy and Scottish business.”