Deputy First Minister Nicola Sturgeon (pictured below) has announced that the Scottish Government is entering into talks to safeguard around 1,400 jobs by bringing Prestwick Airport into public ownership. 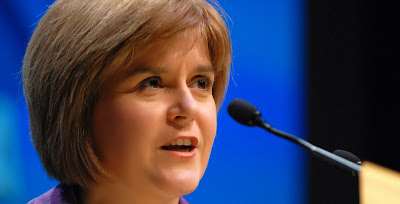 Prestwick Airport has been on the market since March 2012. The Scottish Government, in partnership with Scottish Enterprise and South Ayrshire Council, has been working with current owners Infratil to help find a private buyer.

Despite those efforts and interest from potential investors, the process has now reached a point where it’s clear that no private buyer will be able to take the purchase forward in an acceptable timescale to the current owner.

Ms Sturgeon said: “Prestwick Airport’s importance to the local Ayrshire and wider Scottish economy cannot be overstated – and it is vital that all efforts are made to keep the airport open.

“Around 300 people depend directly on the airport for employment and, in total, there are around 1,400 people whose jobs depend on or are associated with the airport.  Unemployment in Ayrshire is already above the Scottish average and the loss of Prestwick Airport would exacerbate this situation.

“Taking account of the aerospace cluster at Prestwick, there are a total of 3,200 jobs directly or indirectly associated with the airport.  Whilst the aerospace jobs are not directly dependent on the airport, it acts as an anchor for these businesses. It is undoubtedly the case that this important part of the Ayrshire economy would be less secure in the future without the continued operation of Prestwick Airport.

“Prestwick also has important resilience capabilities that provide alternative options to Glasgow and Edinburgh in the event of severe weather conditions.

“Today, I am announcing that the Scottish Government has advised the current owners Infratil of our intention to commence a process towards acquisition of Prestwick Airport.

“Over the next few weeks we will focus on due diligence, legal and commercial issues around public ownership and the development of a business plan that will allow Prestwick to thrive once again.  I want to stress to staff and passengers booked to fly from Prestwick that in the meantime it is business as usual at the airport.  The airport is, and will continue to be, open for business.

“Once a transaction has been completed, I will make a further statement to Parliament.

“With perseverance, patience and innovative thinking Prestwick can have a positive future as part of the wider Scottish aviation industry.”

Ministers are entering into negotiations with Infratil over the potential acquisition of Prestwick Aviation Holdings Limited and its subsidiaries, subject to the completion of due diligence and the appropriate legal processes.

During that process, Infratil would continue to operate the airport as a going concern to maintain its assets and keep it open for business.

“The Airport is critically important to the Ayrshire economy and to the Scottish economy. As well as passenger and freight flights, and pilot training, the airport also has fly-in, fly-out maintenance, repair and overhaul operations. The significance of the airport can be seen clearly by looking at its impact on jobs.

“There are around 1,400 jobs at the airport and dependent on it. The aerospace companies clustered around the airport have a total of around 3,200 jobs. These jobs are high value and are estimated to result in total employment impact at the Scottish level of between 5,000 and 6,000 jobs.

“The Council looks forward to working closely with Scottish Government on securing a bright and sustainable future for Prestwick Airport.”

“Recognising the importance of the airports to their local communities, Infratil’s preference has been to secure a new owner with the capacity to support their future success.

Adrian Gillespie, managing director of operations at Scottish Enterprise said: “Prestwick Airport is a vital part of both the local economy in Ayrshire and the wider Scottish economy, supporting a high number of jobs and businesses.

“We are committed to working closely with our partners to achieve a sustainable future for both the airport and all it delivers for our economy and our communities.”

Posted by Ayrshire Scotland Business News at 4:04 pm No comments:

Leading Ayrshire businessman Alan McLeish has been named one of the UK’s top entrepreneurs in an evening of major success for Scottish businesses in London.

Sponsored in the UK by Credit Suisse, Ernst & Young’s Entrepreneur of the Year programme celebrates the achievements of those who build and lead successful, growing and dynamic businesses across the country. It is the world’s most prestigious business awards scheme for entrepreneurs, with programmes in 135 cities in 50 countries, and has been running in the UK for 15 years.

Mr McLeish’s award recognised the significant growth in QTS, as well as the company’s ambitious growth plans in Scotland, the rest of the UK and globally. Alan established his business in 1991 with a £300 loan, and QTS is likely to record turnover figures in excess of £70 million for the current financial year in the competitive rail and utilities sectors.

Award judges praised Mr McLeish’s “amazing personal business story”, and added that he had “pulled himself up by the boot straps” to build one of the UK’s leading specialist businesses.

Mr McLeish said he was absolutely thrilled to pick up the award. “The past few years have seen major progress and development for QTS across our business in the UK and worldwide and I am thrilled to see that recognised with such a prestigious award,” he added.

“To pick up this award in such prestigious company is the stuff of dreams and obviously a major personal highlight. Hopefully, it also in some way repays the faith my mother had in me when she loaned me that £300 to set the business just over 20 years ago.

“The whole QTS team put their heart and soul into the business and the huge investments in time, commitment and money we are making here in Scotland will help us grow right across the world.

“There are major opportunities at home and globally for our rail services business and we have set ourselves challenging goals for the next twelve months including doubling our turnover to £50 million.”

The QTS Group company, which employs 140 staff, is earning a reputation as one of the most dynamic and innovative companies in Scotland with a commitment to providing real opportunities for apprentices and other staff through industry-leading training.

The company is best known for the innovations that have made it a leading “one stop shop” service to the rail industry, with specialist road/rail machinery to meet all the challenges in the infrastructure, building stations, rail platforms and footbridges elements of the business.

Other Scots winners at the event hosted by the BBC’s Jeremy Vine, included Simon Howie, CEO of the Simon Howie Group, David Lamont, CEO of Aberdeen-based Proserv and Carl Hodson and Duncan Skinner of Glencraft. Their success marked Scotland’s most successful night at the awards ceremony.
James Lambert, chairman of R&R Ice Cream, whose brands include Fab, Skinny Cow and Kelly’s of Cornwall, was named the EY UK Entrepreneur of the Year at the gala event which was held at London’s Park Lane Hilton Hotel.

QTS is committed to supporting local organisations such as schools and charities, and are the major sponsors of Kilmarnock Football Club. QTS’s fleet of distinctive orange, white and black vehicles have become a well-known feature on UK roads as they work on some of the most complex railway infrastructure projects around Britain.

Posted by Ayrshire Scotland Business News at 6:15 pm No comments: