Scotland tees up for golfing bonanza

Scotland’s First Minister Alex Salmond delivered a speech to the European Tour Players Awards Ceremony this week in which he highlighted the huge sporting and economic benefits of Scotland’s position as the undisputed Home of Golf. 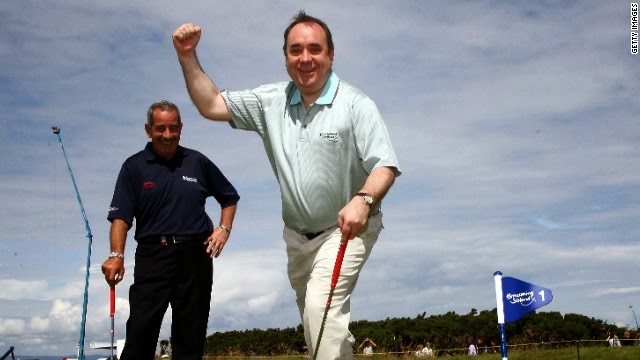 The European Tour invited the First Minister to attend as guest of honour at the Awards Ceremony in London in recognition of the Scottish Government’s support for developing golf in Scotland.

The First Minister used his speech to highlight the sporting and economic successes that golf will deliver for Scotland in 2014, which include:

• This year’s Scottish Open at Royal Aberdeen in July will benefit the local economy by at least £5 million and play host to some of the world’s best players. After the Scottish Open was placed in considerable doubt, the future of the event was secured after a sponsorship deal was brokered between Aberdeen Asset Management and the Scottish Government in 2012.

• American TV channel NBC will provide live coverage of the Scottish Open for the second consecutive year. This makes it the first regular European Tour event to be shown live on a major US broadcast network, opening up the tournament to tens of millions of viewers.

• The Ryder Cup, widely regarded as the third biggest sporting event in the world, will be hosted at Gleneagles in September and will generate at least £100 million for the Scottish economy.

• Catriona Matthew, the first Scot to win a women’s major golf championship, will defend her Ladies Scottish Open title at the Royal Archerfield Course in East Lothian in August.

• According to the latest figures by KPMG, golf tourism is worth more than £1 billion to Scotland.

• The acclaimed ClubGolf Initiative, supported by the Scottish Government and partners, has introduced over 300,000 children to the game since 2003.

The First Minister said: “Scotland is the Home of Golf, and in 2014 we are teeing up for a true golfing bonanza.

“The Scottish Open is one of the flagship events on the European Tour, as well as a jewel in the crown of the Scottish sporting calendar, attracting keen interest from golf fans across the globe. We expect a top class field at Royal Aberdeen in July as players take to one of the world’s finest links course in preparation for The Open Championship the following week.

“The Scottish Open is the first regular European Tour event to be given prime-time coverage on US network television. It is a fantastic boost for Scottish golf and an incredible opportunity for us to showcase the fantastic golf on offer at Royal Aberdeen and the magnificent scenery across the country to tens of millions of US viewers.

“In September, we welcome Europe and America’s best players to Gleneagles to contest The Ryder Cup, a truly massive global event, reaching more than 180 countries and half a billion homes on each day of the competition.

“These two fantastic events can only encourage more and more people around the world to play golf in Scotland, and I’m hopeful we will build on the latest figures that show golf tourism to be worth more than a staggering £1.1 billion to our economy.

“ClubGolf does a tremendous job in introducing the game to hundreds of thousands of youngsters. The Scottish Government will continue to support this wonderful programme to get a club into the hands of girls and boys across the country, laying the foundations for a love of the sport and Scotland’s incredible courses.

“2014 will clearly be a special year for sport in Scotland and we will build on this with some exciting announcements in the weeks to come. What is certain is that everyone in this country can look forward to a bright and exciting future for Scottish golf.”