First Minister Nicola Sturgeon has marked the start of construction of Scotland’s third hybrid ferry, during a visit to Ferguson Marine Engineering Ltd (FMEL) on the River Clyde. 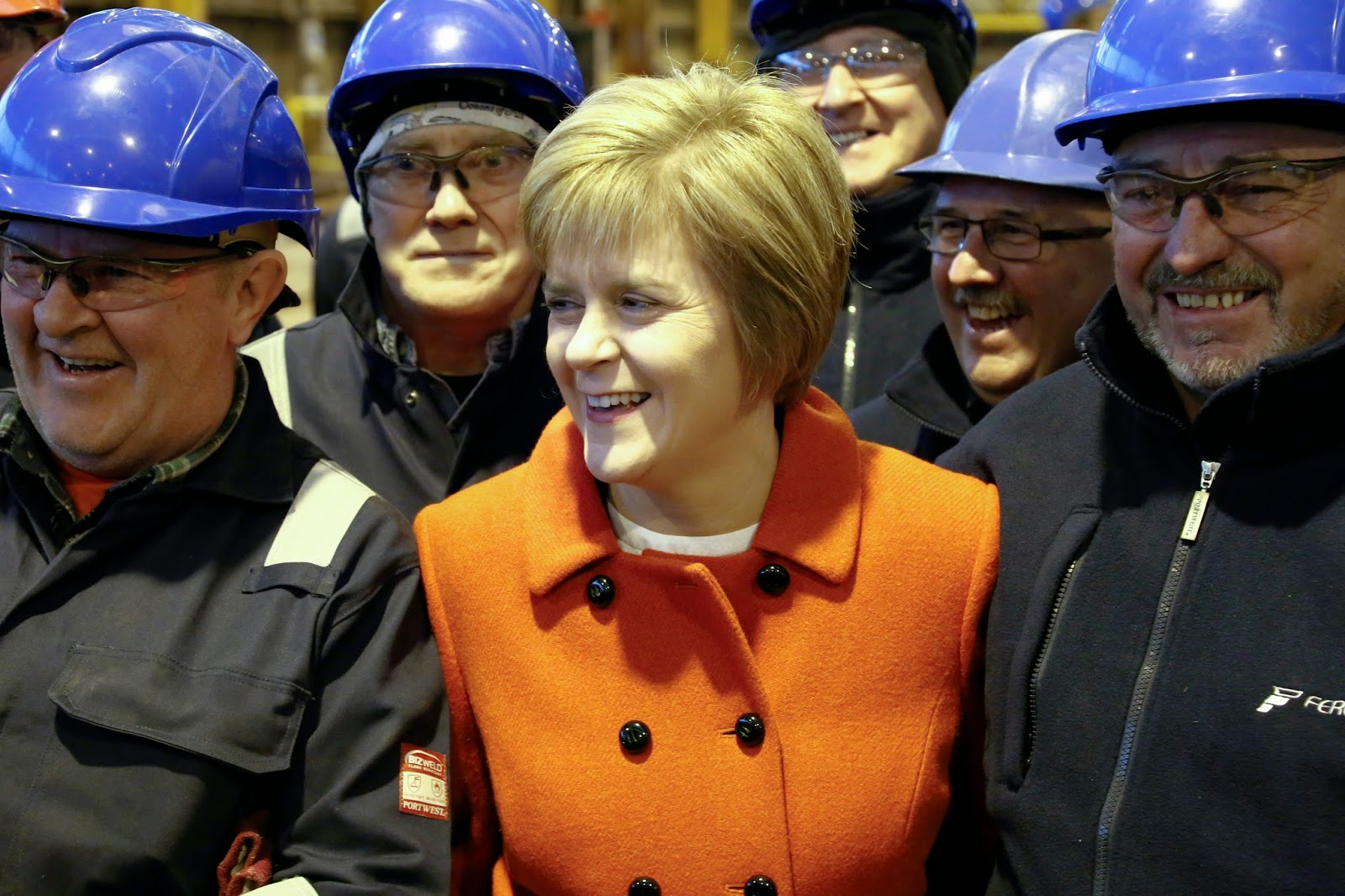 As part of the ceremony, Ms Sturgeon started the computer-guided laser to cut the first steel. She also toured the facility and met some of the workforce who built the two previous hybrid ferries, including the MV Hallaig, launched by Ms Sturgeon in December 2012.

Ms Sturgeon said: “I am delighted to be invited to take part in this steel cutting ceremony and mark the start of work on Scotland’s third hybrid ferry.

“This investment by the Scottish Government is a vote of confidence in our shipbuilding industry, and shows that Scotland remains at the forefront of ferry design and innovation.

“We want our ferries to be sustainable and reliable. This new vessel will be fuel efficient and have lower maintenance costs, whilst ensuring a quality service for passengers.

“I’m also very happy to see FMEL getting down to business and showcasing their expertise in low carbon marine technologies. This will help them show that they are a competitive and attractive option to future clients.

“The Scottish Government responded very quickly to the closure of Fergusons, with Ministers forming a task group which met within days. We worked hard to achieve the purchase of the yard as a going concern and were delighted when Jim McColl’s bid delivered this.

“I wish the shipyard success with this project and look forward to seeing Hull 727 take to the waters in 2016.”

The £12.3 million contract to build the new vessel, known as Hull 727, was awarded in September and is the first major deal for the company since it was taken over by Clyde Blowers Capital.

The new vessel is expected to be launched in spring 2016, before entering service in the autumn of 2016. It will use a low carbon hybrid system that combines traditional diesel power with electric battery power. The system will lead to a reduction in fossil fuel consumption and carbon emissions. It will be built to accommodate 150 passengers, 23 cars or two HGVs, with a service speed of nine knots.

The Scottish Government investment, which is being taken forward by Caledonian Maritime Assets Limited (CMAL), secured around 80 jobs for the Port Glasgow and Inverclyde area, many of whom were employees of the shipyard’s previous owner and worked on the first two hybrid ferries.

Jim McColl, CEO and chairman of Clyde Blowers Capital, said: “This is a great day for Ferguson Marine, for the workforce, Port Glasgow and commercial ship building on the Clyde. I am very pleased to have Scotland’s First Minister with us today to witness the yard’s traditional ceremony which takes place at the start of work on every new vessel.

“When we acquired the company three months ago I said that I believed there was a great opportunity to grow the business, I’m even more convinced of that now. It’s encouraging to get this first order under way today. I am excited about the potential here and look forward to this being the first of many new vessels to be built in this new phase of life for the yard. We have already started back over 70 workers who were paid off, and I am confident that we will be creating many more new jobs over the coming year as we win new business and grow our order book.”

Tom Docherty, CEO, CMAL said: “Today's steel cutting ceremony marks the first important milestone in the construction of a new hybrid ferry for Scotland as work gets underway to build the vessel.

“Hull 727 will become the third hybrid vessel in our fleet, strengthening our commitment to using cutting edge technology and design to create innovative, sustainable and reliable ferries.

“We look forward to the new hybrid vessel going into service in 2016 to join MV Hallaig and MV Lochinvar, our existing hybrid ferries. It is the latest step in our ambitious fleet renewal plans to ensure our ferries continue to meet the needs of the communities we serve.”

The vessel has been designed and procured for service under the Clyde and Hebrides Ferry Services contract between the Scottish Ministers and CalMac Ferries Ltd, which has been extended to run until 30 September 2016.

CMAL will hold a competition in the New Year to decide the name of the new vessel, which will be the third in the Scottish Literary Class of ferry.

The two hybrid ferries previously constructed at the yard, the MV Hallaig and the MV Lochinvar, are currently in service with Calmac Ferries Ltd.

The MV Hallaig was launched in December 2012 operates on the Sconser-Raasay route.

The MV Lochinvar was launched in May 2013 and operates on the Tarbert-Portavadie route.