THE first dead heat at Ayr Racecourse in many years marked the opening of the two-day May meeting last Wednesday.

In a pulsating finish to the six furlong maiden Ancient Astronaut, ridden by Phillip Makin and trained by John Quinn, got up on the line to share the spoils with the Kevin Ryan trained Shane Gray ridden Ferryover. 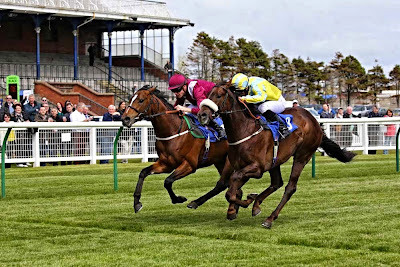 Quinn and Makin won the corresponding race last year with The Wow Signal who went on to win the Coventry Stakes at Royal Ascot and the Group 1 Prix Morny at Deauville. Ancient Astronaut will attempt to emulate his now retired stablemate.

The in-form Linda Perratt saddled a winner on each of the two days with the same horse. On Wednesday Rock Canyon was successful over six furlongs in the Weddings At Western House Hotel Handicap.

On Thursday over the shorter distance of five furlong Rock Canyon came with a late thrust to pip another Perratt runner Saxonette and land the Bacardi Carta Oro Handicap. PJ McDonald was in the plate for Wednesday’s win but had chosen to ride Saxonette on Thursday with Connor Beasley benefitting.

Ayr’s next meeting is on Monday 8 June. For more information on racing at Ayr or to book tickets call 01292 264179 or go online at www.ayr-racecourse.co.uk