More powers and ending austerity on
agenda during ‘constructive’ talks

More powers for the Scottish Parliament and ending austerity were on the agenda today as First Minister Nicola Sturgeon met Prime Minister David Cameron at Bute House in Edinburgh. 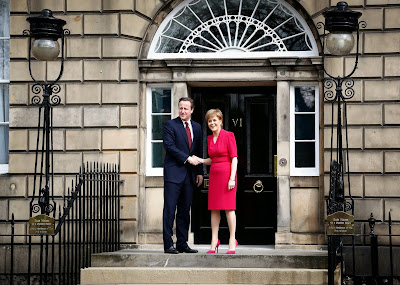 During their first face-to-face talks since the general election, the First Minister welcomed a commitment by the Prime Minister to look at proposals from the Scottish Government to extend Holyrood’s power beyond the plans outlined in the Smith Commission.

Ms Sturgeon also welcomed the Prime Minister’s agreement that legislation currently being drafted to take forward further devolution would implement in full the Smith Commission proposals and also take account of the report published by the Scottish Parliament’s Devolution Committee earlier this week.

The discussions, which were described by the First Minister as “constructive and helpful”, also covered her desire to tackle austerity, with further proposals on how this could be achieved within the UK Government’s own fiscal mandate now to be submitted by the Scottish Government and considered by the Prime Minister in due course. 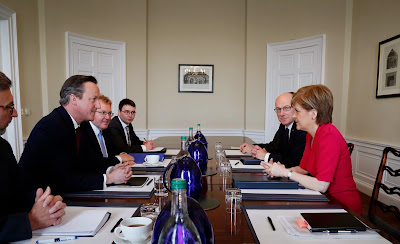 To take forward these points, the First Minister and Prime Minister also agreed to much closer contact between their respective governments, with a commitment to increasing the number of bilateral meetings between the pair.

First Minister Nicola Sturgeon said: “I was pleased to welcome the Prime Minister to Bute House for what were constructive and helpful talks on a range of issues following the outcome of the UK general election.

“During the meeting, we had a productive discussion about the Smith Commission proposals and where we might go beyond them. From that, two things of importance were agreed. Firstly, there was a commitment from the Prime Minister that the legislation being drafted will fully implement the Smith Commission proposals and take account of the conclusions of the Holyrood committee report that was published yesterday.

“Secondly, the Prime Minister agreed that he would look at proposals the Scottish Government will bring forward on how we go beyond the Smith Commission in various important areas. There was no agreement on the substance of that, but the Prime Minister has said he will consider our proposals and there will be a meeting, in the first instance, between the Deputy First Minister and the Secretary of State for Scotland to look at how we take that further forward.”

The First Minister continued: “The Prime Minister and I have agreed to meet more regularly, which is a good step forward. We have also agreed to much closer contact between Ministers in the Scottish and UK governments to discuss issues of common interest and policies that impact on Scotland at a much earlier stage – that’s all very positive.

“David Cameron and I are a world apart politically but, where we can, I’m determined that we do business in the interest of people in Scotland and across the UK and I’m determined to have a constructive and business-like relationship.

“I hope that the Prime Minister can now show he can respond and deliver a better deal for Scotland, with an empowered Scottish Parliament with the powers over business taxes and employment law, the minimum wage and welfare that enables us to grow our economy, get more people into jobs, and lift people out of poverty. Because, ultimately, that is what this process is all about.”

The First Minister confirmed that discussions had also covered austerity and public spending across the UK. She said: “The Prime Minister has a fiscal mandate, but even within that that I believe there is enough flexibility to ease the pain of austerity, invest in the things that matter while still getting the debt and deficit down. We have agreed to send our analysis and proposals to the UK Government and he has agreed to look at them. I have a duty as First Minister of Scotland to stand up for the things I believe the people of Scotland want and I will not shy away from doing that.”