This autumn sees the 29th annual Ayr Concert Series, arranged by volunteers from Ayr Arts Guild for South Ayrshire Council and it promises to be one of the best yet! 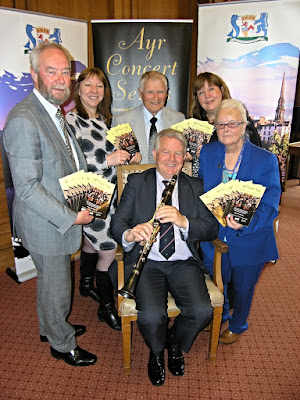 From Friday 30 October 2015 to Friday 18 March 2016, six professional orchestral concerts will be performed in Ayr Town Hall, and the line-up again promises to deliver the very best music, led by the cream of international conductors.

The series features three visits by the BBC Scottish Symphony Orchestra, two by the Scottish Chamber Orchestra and one by the Royal Scottish National Orchestra last heard in Ayr Town Hall six years ago.

The opening concert on Friday 30 October 2015 features Martyn Brabbins conducting the BBC SSO to play Ginastera’s Variaciones Concertantes, followed by Bach’s sparkling Concerto for two Violins with soloists Laura Samuel, leader, and Kanako Ito, associate leader.  The evening ends with Schumann’s Fourth Symphony, one of the most exhilarating works in the Romantic repertoire.  The concert will be recorded for future broadcast on BBC Radio 3.

That’s followed by the Scottish Chamber Orchestra on Wednesday 11 November, conducted by Joseph Swensen celebrating the 150th anniversaries of Jean Sibelius and Carl Nielsen.  The atmospheric Pelleas et Melisande Suite recounts a tale of doomed love through some of Sibelius’s most expressive music, whilst his seldom heard Third Symphony is a study in wit, melodiousness and musical economy.  In between, SCO principal flute Alison Mitchell is the soloist in the idyllic evocations of Nielsen’s Flute Concerto.

On Thursday 17 December, the BBC Scottish Symphony Orchestra returns for its much loved festive special Christmas Classics 2015 concert in the Town Hall.  It’s a mixture of traditional carols for all the family, favourite works by Handel, Tchaikovsky, Malcolm Arnold, Irving Berlin and many more orchestral classics led by conductor Richard Balcombe and presented by tenor Jamie MacDougall, who holds the whole affair together with wit and panache.

New Year 2016 gets off to a flyer on Tuesday 5 January, with the Scottish Chamber Orchestra, conducted by Conductor Emeritus Joseph Swensen.  New Year would not be complete without favourite Viennese waltzes and polkas.  The programme will be enhanced by Joseph Swensen playing

Massenet’s gorgeous Meditation and his own arrangement of Three Romances by Clara Schumann, dreamy, characteristically noble and passionate.  The concert ends with The Blue Danube Waltz.

Friday 29 January sees the Royal Scottish National Orchestra under the baton of the award-winning young German conductor Clemens Schuldt performing Ligeti’s roof-raising Concert Romanesc, Mozart’s delicious Bassoon Concerto with soloist David Hubbard and Brahms’s Fourth Symphony, which begins with a sigh and ends with a tempest.  Last heard in Ayr Town Hall in November 2009, it will be a treat to hear the RSNO play here once again.

The Ayr Concert Series comes to a finale on Friday 18 March with the BBC Scottish Symphony Orchestra’s leader Laura Samuel directing the strings in the Ouverture-Suite in C Major by Telemann before three more of the orchestra’s principal players join her for Haydn’s delightful Sinfonia Concertante.  Mozart’s Divertimento in F major for strings follows, then Beethoven’s First Symphony, premiered in 1800 and showing the influence of both Haydn and Mozart but also some characteristics of a new compositional style, bringing a perfect end to the 2015/16 season.  The concert will be recorded for future broadcast on BBC Radio 3.

Season tickets for the 29th Ayr Concert Series are now available by post from Ayr Gaiety Theatre, Carrick Street, AYR, Tel: 01292 288 235.  A season ticket for all six concerts costs £120 in the circle (reduced from £132) or £102 (reduced from £114) in the stalls, thus offering good savings.  Ayr Concert Series is a unique partnership between the local authority, the voluntary sector and the Scottish orchestras.  Individual tickets will be on sale from Tuesday 1 September.

Councillor Bill Grant, South Ayrshire Council’s Portfolio Carrier for Economic Development, Tourism and Leisure said:  “Music lovers will again be thrilled with the wide range of concerts to choose from and, better still, the superb value season ticket options now available, so make sure you don’t miss out on any of these orchestral gems in Ayr’s superb Town Hall.

“It’s almost impossible to choose which concert to go to, as there really is something for everyone, so buy a season ticket now and make sure you hear them all!

“Prices for all seats have been held steady for the last four years, making the Ayr Concert Series outstanding value for money.”

Brochures containing details of all concerts in the Ayr Concert Series 2015/16 are available from all Ayrshire libraries, the Council Customer Service Centres, Ayr Town Hall and the Tourist Information Centre, Sandgate, Ayr.

“Residents and visitors to South Ayrshire will be able to hear world class orchestras, internationally acclaimed musicians and globally successful performers, right here on their own doorstep.”

Jim Coutts, Chairman of Ayr Arts Guild added:  “We’re proud to have been involved in this unique and productive partnership with the Council and Scottish orchestras, which is now approaching 30 years.  “In that time, we’ve hosted some of the most famous names in the business and the 29th series promises yet another impressive line-up of international musicians, all enhanced by the presence of some globally acclaimed conductors.”

Councillor Grant concluded:  “It’s a magical medley of marvelous music, so please get your season ticket or season tickets soon, because it’s looking like another superb sell-out series for Ayr!”

Posted by Ayrshire Scotland Business News at 11:44 am