SCOTTISH based trainers stole the show at Ayr's totepool Raceday on Monday saddling four winners out of the eight races with Jim Goldie bagging a double.

Keith Dalgleish set the ball rolling when Dark Defender, a 14/1 chance,  won the opening six furlong maiden stakes under a confident ride from Phillip Makin holding off Birkdale (9/4) by a length and a quarter. 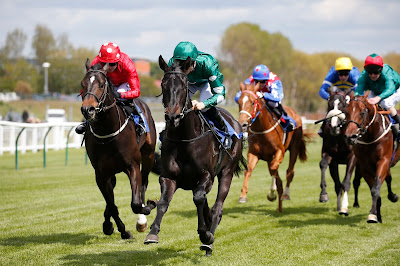 A superb late surge saw Goldie's Funding Deficit (12/1), the mount of Fergal Lynch, land the seven furlong Bet totetrifect Handicap and later in the card the Uplawmoor trainer and Irish jockey teamed up again when Tiger Jim (15/2) won the £8,000 plus prize in the feature race, the six furlong mytotepool.com Handicap.

Lucy Normile's Royal Duchess recovered from a bad start to win division one of the totepool Betting On All UK Racing Handicap after being sent off the 15/8 favourite under Sammy Jo Bell who said afterwards: "My foot came out of the irons at the start and I almost fell off. Thankfully I recovered and she's won well."

Another female jockey to ride a winner was Emma Sayer who partnered Blue Jacket, owned by her father Andrew and trained by her mother Dianne to win the second division of the totepool Betting On All UK Racing Handicap.

Ayr’s next meeting is on Saturday 20 June with the feature being the Land O’Burns Fillies Stakes, a Listed Race over five furlongs.

Posted by Ayrshire Scotland Business News at 11:34 am