THE first Saturday meeting of the 2015 Flat season at Ayr Racecourse – Scottish Sun Raceday - takes place this weekend, and the entries read like a who’s who of the training ranks. 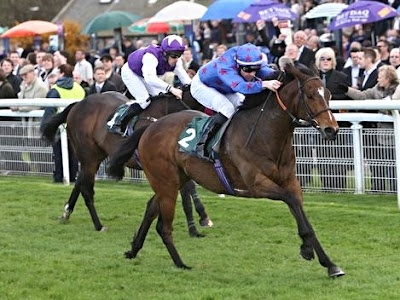 [Pictured: The veteran sprinter Borderlescott is likely
to be in action at Ayr Racecourse on Saturday.]

There are 21 entered for the showpiece of the day, the £40,000 Scottish Sun/British Stallion Studs EBF Land O’Burns Fillies’ Stakes, a Listed Race over five furlongs.

The ultra-consistent Spinatrix from the Michael Dods yard is the one that stands out here. Rated 108 this is one of the best sprinters in the country while other useful horses with entries include the Godolphin owned Wanting and Newmarket raider Iffranesia.

There are also two tasty one mile handicaps on the card and in the first of these at 2.20pm Sir Michael Stoute has the Hamdan Al Maktoum owned Mukhayyam entered while in the second of these valuable races Sound Advice, trained by Keith Dalgleish and part owned by Ayr businessman David Savala could be an interesting runner.

The veteran sprinter Borderlescott, now aged 13, winner of almost £800,000 in prize-money is down to run in the five furlong Arnold Clark Handicap at 4.50pm and with PJ McDonald in the saddle is sure to have his supporters.

The afternoon’s action ends at 5.25pm with the Capital FM Handicap over six furlongs and another veteran in the shape of 12 year-old Barney McGrew, runner up in the 2009 William Hill Ayr Gold Cup is set to run in the hands of Connor Beasley.