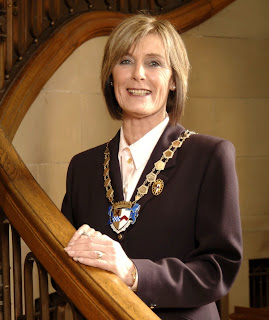 As a long standing member of the Conservative Party, Winifred  Sloan  held different political offices at local and national level, before being elected to the Kyle and Carrick District Council in 1992.

In 2006, Councillor Sloan was elected Provost by fellow councillors, which was a role she carried out until May 2012.

During her term of office, Winifred was the Council’s Veterans Champion and was heavily involved with the Armed Forces, being one of the founders of Veterans First Point Ayrshire. Even after she retired from Council, Winifred continued to be very active in the community, was Vice Dean of Ayr Guildry and was actively involved with Headway Ayrshire.

Councillor Bill McIntosh, Leader of South Ayrshire Council has said: “We are all saddened to hear of Winifred’s passing, and our thoughts are with her family at this time. Winifred was a tireless advocate for the people of her ward and also an outstanding ambassador for South Ayrshire. She will be sadly missed, but fondly remembered.”