NHS Ayrshire & Arran leading the way to a tobacco-free generation

NHS Ayrshire & Arran is the first area NHS board in Scotland to endorse Scotland’s Charter for a Tobacco-free Generation.

The Charter for a Tobacco-free Generation is a new initiative from health charity Action on Smoking and Health (ASH) Scotland in response to the Scottish Government’s goal of creating a tobacco-free generation of Scots by 2034. 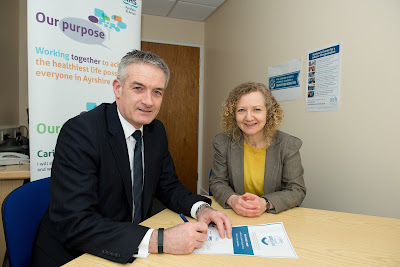 [Pictured: Chief executive John Burns signs on the dotted line to declare NHS Ayrshire & Arran as the first NHS territorial Board to sign up to Scotland’s Charter for a Tobacco-free Generation with Dr Carol Davidson, Director of Public Health.]

The Charter has six key principles that encourage organisations to examine how they can best contribute to the tobacco-free goal. NHS Ayrshire & Arran is joining a list of national organisations which have already backed the Charter including Children 1st, British Lung Foundation, British Heart Foundation, Aberlour Childcare Trust, and the Scottish Cot Death Trust.

NHS Ayrshire & Arran’s endorsement of the Charter is the latest in a series of actions taken to help reduce the harm caused by tobacco. In March 2015, all NHS Ayrshire & Arran’s grounds went smoke-free, and they have also supported other public and private sector organisations in Ayrshire and Arran to move to smoke free grounds.

Currently, patients who smoke and have to stay in hospital are visited by a Fresh Air-shire advisor. These specially trained advisors are able to assist patients in managing their smoking while they are in hospital. This may involve being prescribed Nicotine Replacement Therapy (NRT) for abstinence while in the hospital, or being given further NRT, advice and support to stop smoking after the patient is discharged from hospital.

ASH Scotland chief executive Sheila Duffy said: “Scotland has a vision of making smoking unfashionable, with fewer than 5% of the population still smoking by 2034. It’s a compelling vision and one worth striving for. If we all work on this, the children who are just going into nursery school now can be the first generation to grow up free from the harm caused by tobacco. ASH Scotland welcomes NHS Ayrshire & Arran in joining us in our work towards a generation free from tobacco.”

“Our Fresh Air-shire team work in nurseries, schools, further education, workplaces, GP practices, prisons, hospitals and community venues to offer support and advice in relation to all aspects of tobacco control, that is, prevention, cessation and protection.

“But we realise there is still a lot to do and we now intend to bring more people on board with the idea of a smoke-free generation in Scotland by 2034 by advancing Charter principles through our leadership of the Pan-Ayrshire Tobacco Control Strategy Steering Group.”

To talk about any aspect of smoking including help to stop, the effects of second-hand smoke or information about e-cigarettes, call free on 0800 783 9132, or email freshair-shire@aapct.scot.nhs.uk
Further information on Scotland’s Charter for a Tobacco Free Generation can be found at www.ashscotland.org.uk/charter
Every day in Scotland, 40 young people become new smokers, which equates to 15,000 young people each year.

Preventing or delaying children from taking up smoking has been shown to reduce the burden of disease in later life and make it more likely that they will not smoke.

One in three (34 per cent) adults in the 20 per cent most deprived areas in Scotland smoke cigarettes.

Almost half of adults who are permanently sick or disabled (48 per cent) or unemployed and seeking work (46 per cent) are current smokers.

Email ThisBlogThis!Share to TwitterShare to FacebookShare to Pinterest
Labels: NHS Ayrshire and Arran